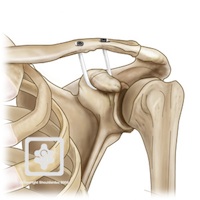 Ligaments used to repair the ACJ need to have capacity to bear the heavy load of the upper limb, thus it is important that they have adequate structure and biomechnical integrity to act as a scaffold while the tissue regenerates. Due to complications and poor outcomes with past techniques, most surgeons are now advocating to anatomically reconstruct the coracoclavicular ligaments. Studies have shown that anatomical reconstructions better match the stiffness of the native coracoclavicular ligament and gives better results than with past non-anatomic methods.

The LARS ligament reproduces the anatomy and mechanics of the torn coracoclavicular ligaments and acts as a reinforcement to allow the coracoclavicular ligament to heal and grow into the synthetic fibres. They allow immediate mobilisation with no material through the joint. The fixation is via two bony tunnels and not an "over-the-top" approach, thus reducing clavicular erosions. The use of loop techniques offers the possibility of an earlier return to work especially in younger, active patients or ones with a high-grade dislocation.

About the LARS Ligament:
LARS ligaments are intended for the reconstruction of ruptured ligaments. The LARS ligaments have longitudinal-running fibres that match the structure of native human tissue. They therefore are able to act as a scaffold for fibroblastic culture and good healing.

The material used is polyethylene terephthalate - an industrial-strength polyester fibre which has the ideal characteristics for ligament replacement applications. Each type of LARS ligament contains a specific number and length of fibres, depending on the intended use, and varying leaders to facilitate passage through the bony tunnels.

Biological and mechanical testing on resistance, fatigue and creep have shown that LARS ligaments are highly effective ligament reconstruction and augmentation devices, and long-term clinical results are excellent. Biopsies done on the LARS ligament have shown complete cellular and connective tissue ingrowth, along with the presence of some endothelial cells suggesting vascularisation of the tissue. Research into the success of the LARS ligament in reconstruction of the anterior cruciate ligament compared to the gold standard bone-patellar tendon-bone graft have shown comparable results with no adverse reactions, indicating good biocompatibility of LARS (Trieb, Blahovic, 2003). Strength tests done on the LARS ligament have shown that it is quite resistant to torsion and traction, as well as to flexion and residual stretching.

There is no risk of tissue rejection as it is biocompatibility with the body's native tissue. Tests on the ligament showed no evidence of inflammatory, immunological or infectious reactions with human tissue. Human cells were seen to attach to and develop on the LARS fibres in both the intra and extra-articular parts. These factors are good evidence of its biocompatibility and are another reason for its success in reconstruction.Other tests on the ligament showed there to be a very low rate of residual stretching thus the shoulder will not become unstable. The ligament was shown to be have no reduction in mechanical resilience after over 10 million wear cycles that tested the effects torsion, traction and flexion (CM Orthopaedic, 2006). Thus the LARS reconstruction is a very strong and reliable method of reconstruction that will imitate the native ligament to a high degree.
After the operation the patient will require a sling for 3 weeks but can gradually mobilise the joint straight away so it does not stiffen up. The patient should have passive motion within 2 days, active motion within 6 days and be able to return to work in 4 weeks. With this early rehabilitation there is less atrophy of surrounding muscle compared with older techniques. The technique allows natural rotation and movement of the clavicle so the patient can return to normal activity with no restrictions and there should be little or no post-operative pain. Results documented by the official LARS ligament distributors have shown that with the use of LARS 90% of patients were pain free, 95% had no swelling and 86% of patients have no restrictions to movement postoperatively.

LARS ligaments have been in clinical in use for over 15 years. There are many studies and publications supporting the use of LARS for many indications.