Arthroscopic Excision of the Acromioclavicular Joint

Excision arthroplasty of the acromioclavicular joint is a well-tried and tested procedure for degenerative change at this joint. Traditionally, via an open exposure, the outer centimeter of the clavicle is removed, and any osteophytes on the acromial side are also trimmed. This can also be achieved arthroscopically. One may be forgiven for thinking that this may be the triumph of technique over reason, or that this is how to make a simple job difficult. However, the arthroscopic method has certain distinct advantages.

The diagnosis is essentially clinical, but confirmation of degenerative change in the acromioclavicular joint can be made with either plain radiographs or bone scan, in particular when the diagnosis is in doubt.

The patient is positioned in the lateral position with the arm on traction as for gleno-humeral arthroscopy, with one small but important difference. Instead of directly on the side, the patient is rolled toward the operator, who is standing by the posterior aspect of the patient. This allows ease of maneuverability of the shaver anteriorly during resection of the joint.

The arthroscope is inserted through the standard posterior portal. First, a routine gleno-humeral arthroscopy is made to exclude any other source of shoulder pain and pathology. The arthroscope is then passed superiorly into the subacromial bursa, as described in Chapter 11 (Fig. 13-1).

The undersurface of the acromion is checked to make sure there is no obvious subacromial cause for the pain. The joint is then palpated from outside, and a direct anterior portal made 4 cm anterior to the joint. The shaver is passed through this anterior portal into the subacromial bursa and is directly visualized with the arthroscope (Fig. 13-2). 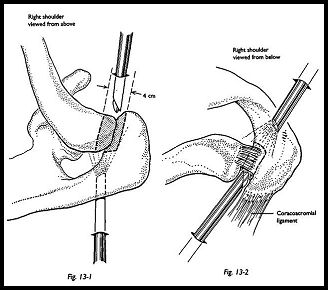 Bone is then resected from the -whole depth of the medial portion of the acromion, such that the whole of the lateral end of the clavicle is visualized. The outer centimeter of the clavicle is then removed with the power shaver, taking more bone inferiorly than superiorly and more bone posteriorly than anteriorly, because this is where any residual impingement may occur (Fig. 13-4). During this maneuver, the exact superior edge of the bone is easily identified from the overlying capsule and ligament, and hence every effort is made to preserve the superior capsule and ligament, to preserve stability in the excision arthroplasty 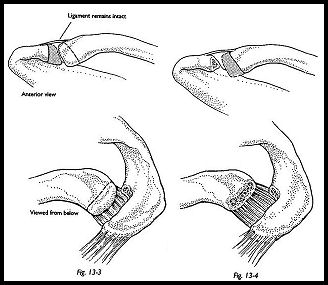 Alternative Procedure (in Conjunction With Acromioplasty)

Too much bone may be resected from the acromion, hence weakening the deltoid attachment. The amount of bone removed from the outer end of the clavicle may be assessed by judging against the width of the shaver; that is, if it is a 4-mm shaver, then approximately two and a half times its own width must be removed. As part of the subacromial bursa is resected medially, swelling increases rapidly once the bursa is broached. The procedure should then be completed as quickly as possible with the most minimal inflow pressure possible to reduce the amount of swelling. The swelling in itself is not a problem, because this quickly reduces postoperatively, but it can affect the mobility of the shaver through the portals if the swelling is great. The inflow pressure is kept at just above arterial pressure.

The patients are put in a sling for pain relief but told that they can do no harm by moving the arm and are encouraged to do so from as soon after operation as possible. Most patients get rid of the sling within a few days but are told they will still have discomfort in the shoulder when they are seen for review at 3 -weeks. In 3 -weeks they generally have a good range of movements at least below shoulder height and are told that it takes 3 months to get 80 percent of the improvement. The time scale to the static level is the same as that for open excision arthroplasty, but time off work is generally less. 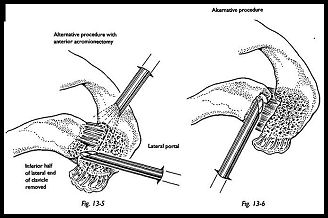