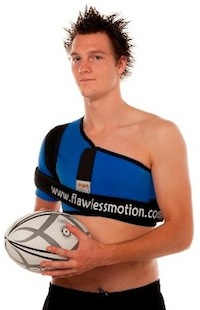 Shoulder braces are thought to assist after injury in a variety of ways. These include supporting the shoulder, as well as compression of the surrounding skin and tissues. Neoprene braces are also thought to offer some protection to the skin and superficial tendons due to the thickness of the neoprene. Additionally it is thought that some braces which limit the range of motion of the limb may decrease the risk of dislocation by preventing the shoulder from moving into vulnerable areas. Finally there may be some placebo effect where athletes just feel more supported and invincible just by having the brace on.

Support of an injured limb can be vital and can speed up the recovery process following injury. Some braces work to compress swollen joints and aid in the recovery of inflammation. Braces can also take the support of injured muscles, allowing them to rest and recover quicker. An ideal brace will have a close fit and will be sized in several sizes and right or left sides to enable a snug fit. Some braces are custom made to fit the individual which increase the support. However these types of brace can Compression of the shoulder is thought to enhance the receptors in your skin by sending messages to your brain about the position of your shoulder. Research studies [1, 2, 3] have shown that people who have suffered from instability in their shoulder (such as a subluxation or a dislocation) have a decreased sense of awareness in their unstable shoulder. This awareness is termed proprioception and includes knowledge about the position of your arm, the amount of force your muscles are applying, as well as the coordination with other muscles. Other research4 has shown that wearing a brace is able to improve the proprioception in unstable shoulders. These authors proposed that the beneficial effects of wearing a brace are due to the increased compression on the receptors in the skin. This allows the skin receptors to compensate for the damaged receptors in your shoulder capsule or muscle.

Protection of the skin may also be offered by wearing a neoprene brace. Many of the tendons in the shoulder are quite superficial and the wearing of a brace can protect the skin and superficial tendons from bumps and knocks.

Wearing a shoulder brace may also decrease the risk of dislocation by limiting the range that the shoulder is able to move into. Nearly 95% of dislocations occur in an anterior direction [5] and most of these are with the arm stretched away from the body with the hand turned up to the sky. Dislocations in this position cause damage to the inferior glenohumeral ligament and labrum (the cartilage that increases the support in the shoulder). Some authors [6] have thought that if you limit the range of motion that the arm can move into, people will be less likely to have another dislocation. The flawless motion brace is unique in that it allows wearers to lift their arm up forwards in front of them without allowing them to move into riskier positions such as abduction.  Thus players are still able to perform overhead activities but are limited from moving into risky positions. Strengthening of the shoulder is also possible while wearing a shoulder brace. Some braces have neoprene straps which offer more resistance as they are taken into more stretch. Every time the arm is moved, the muscles have to work harder to resist against the straps. Because some research [7] has shown that shoulder injuries often result in, or are accompanied by, decreased strength of the shoulder muscles, many physiotherapists and surgeons recommend strengthening the shoulder joint after injury. Wearing a shoulder brace can therefore facilitate the strengthening process of the injured shoulder. Offering increased resistance to movement of the limb will also have the effect of slowing down the speed that the arm can move into risky positions. Research [8] has shown that muscles of unstable shoulders take longer to become active than the muscles of normal healthy shoulders. Therefore slowing down or decelerating the limb gives the muscles on the unstable shoulder more time to react, and therefore more time to get ready to provide more support and resistance to knocks and force from the external environment. Some braces also work to heat the tissues under the brace and propose that this will help with healing. Because there is no firm evidence to support this and because flawless motion braces are designed to be worn during sporting activity, great care has been taken to decrease the heat that is stored under the brace. Lightweight versions are available with mesh inserted in place of neoprene where support is not required. All braces are made of the thinnest breathable neoprene available, with holes spaced in the fabric to allow the sweat to escape away from the body. Research has shown that increased heat of the body has negative effects on performance [9] and therefore keeping the body cool, or limiting the heat retention is ideal in sporting braces. This is one of the key differences between sporting shoulder braces and braces which are made to wear in general everyday use by the non-sporting patient. Keeping cool is also more comfortable for the wearer and means they can wear it longer and have the increased benefit due to the other beneficial factors.

Some research [10] has proposed that the benefits of wearing a brace are due to a placebo effect where the wearers simply feel better because they are doing something to help their injury. This may in fact be true and the positive psychological effects of wearing the brace should not be underestimated. Wearers not only feel that they are actively doing something to support their shoulder and prevent further injury, they also feel more protected from knocks and blows from others around them. This encourages injured players to partake more readily in activities and therefore maintain their fitness and social interaction with their team members and others.

Thus there are several reasons why wearing a shoulder brace can be beneficial. Initially in the early stages following injury they can be used for support and protection to aid the healing process. Later on in rehabilitation process, shoulder braces can be used to increase proprioception and muscle control, as well as limiting the chance of further injury by limiting range of motions and strengthening the shoulder muscles.


Flawless Motion Braces can be purchased online from FlawlessMotion.com