Scapular muscle detachment is the traumatic detachment of the rhomboids and/or lower trapezius muscle from the medial border (the side closest to the spinal column) of the scapula (shoulder blade).

Detachment of one or more of the scapular muscles can occur as a result of tensile or direct blow/compression injury mechanisms. Some examples of injuries include motor vehicle accidents with the involved arm typically being the arm that was not protected by a seat belt and traction injuries such as the arm being pulled away from the body during lifting or lowering of heavy objects or sudden unexpected events such as a leashed dog sprinting away from its owner. Athletic injuries from weight lifting or hard throwing are not uncommon while direct trauma such as falling and landing on the back or having an object strike the scapula can occur as well.

Patients often complain of localized pain along the muscles at the corner of the scapula just below the neck and along the medial border of the scapula. Moderate to severe pain is present with rest or during movement and is often described as pain that worsens with arm movement in front of the body and overhead. Patients often cannot perform tasks which involve using the arm in forward elevation at and above shoulder height. Headaches and muscle spasms are common.

Due to unfamiliarity with this injury, patients can often go undiagnosed for years or maybe misdiagnosed as having primary cervical or glenohumeral pathology. It is not uncommon for patients to display altered pain perception characteristics such as hypersensitivity to touch or altered psychological characteristics such as depression, anxiety, or having negative outlooks on the possibility of recovery.

Imaging is minimally helpful because the muscles do not tear in the same manner as other tendinous muscles do where a lack of continuity can be appreciated on advance imaging such as MRI or CT scan. Instead, the scapular muscles pull away from the bone but rest over the natural attachment site following detachment. Electromyography is often interpreted as normal or with minimal alteration in muscle activity.

Surgical reattachment of the detached muscles is recommended. This can be achieved by first placing drill holes through the medial border of the scapula. Sutures are then inserted into the torn muscles which are then pulled to the holes made in the bone. Rehabilitation following surgery ranges from 4-8 months. 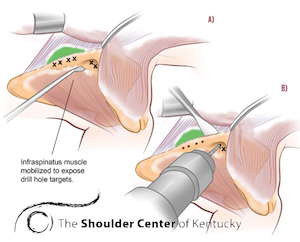 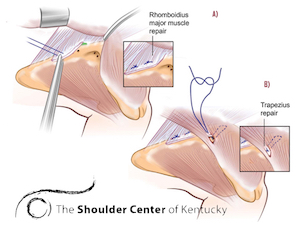 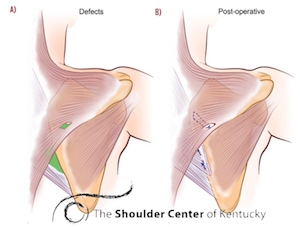