I thought I would share my experiences of the tearing of my left pectoral and rehab , has this information may help others, and also as a thank you for the brilliant work done by my surgeon and his team

June 3rd 2005
Working in London . I caught the train up to Leeds 200 mile journey and went to work on the door (nightclub security) worked very late . I mention this because fatigue could be a factor.

At the time I had an extremely busy lifestyle and not much rest in general. I was taking testosterone enthanate and dianabol and some growth hormone. I was training in mixed martial arts. This involved a lot of wrestling and submissions, which places a lot of strain on joints. Some moves involve hyperextending joints to make a person submit. I was also boxing a lot. I weighed about 98 kilos and felt superfit.
I slept maybe 3 hours then went to gym.

June 4th 2005
Went to gym with a few mates, did warm up properly , and pyramided weights up .

On the 4th rep as the bar was coming up about 3 inches of my chest I felt my chest tear and I swear I felt the pec  whiplash. A few people grabbed the weight off me. It hurt but not a lot. It ached under the armpit a bit.

Went to physio 4 hours after.
He said it may be torn and arranged an MRI scan. In the meanwhile rest and ice was recommended.
While at physio I could see slight bruising. Over the next few days my arm looked like it had been kicked by an elephant. Looked bruised and reddish from the outer left pec down to my elbow. 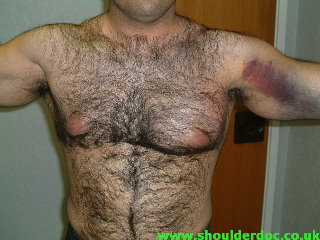 June 7 2005
Walked into the local casualty department. Asked for MRI and showed my arm to a doctor. I immediately noted a very negative attitude from the doctor. She replied this is not America we do not do a battery of tests on people. She said my injury was Musculoskeletal and not a priority. I insisted on treatment she said I could see an orthopedic surgean. But could not guarantee he would be an upper body specialist. She then said an MRI may not be necessary as they can quite often diagnose without.
I stormed out of hospital. Never to return.

I had already sent pictures to Manchester Sports Medicine Clinic of my injuries and was surprised when the Practice Manager rang me. I had just as I walked out of the casualty department. He said I could see the surgeon quickly . Through a lot of studying about bodybuilding and nutrition and steroids. I was aware the I needed to be treated within 2 weeks.

June 8 2005
I had MRI scan in the morning , lasted an hour , hard to fit in the machine.
I managed to persuade them to let me leave with MRI results. This made me happy because I could take them to my surgeon.

June 8 2005 pm
Went to see my surgeon. He confirmed a complete tear off the bone, but said tendon and muscle looked good, and said this is a easy repair. If the tendon had come away from muscle lots worse.
He said he would put some anchors in the bone and using a super strong stitching material fix the tendon. He had a 'can do' attitude and this immediately lifted my spirits. He also used ultrasound and pointed out the injury explaining clearly the damage and how it would be repaired, that I would where a brace for 6 weeks. He said I could start light training in 3 months. He did not give a firm guarantee of 100% success, but I could see he was quietly confident. You notice things about people when you are a doorman for 17 yrs.

June 17th  2005 AM Surgery
Had my operation lasted 2 hours. The staff at the hospital where fantastic
I woke up in a special sling which fastens round waist and shoulders, arm is bent 90% at elbow and facing forward.

June 17th  2005 PM After Surgery
This sling is hell to wear cannot sleep in it. Spent most of time sleeping in armchair at night. Started panicking a bit because arm seemed to fill with lactic acid when laid on back . Nurse rang my surgeon for me at 10.30 pm to allay my fears of cramping.

June 18th  - July 29  (2005)
Had some mechanical problems with the brace.
The bit the Velcro fastens to on the brace came away several times during this period. I rang my local hospital, but they said they would not fix it unless they had a letter from my surgeon. I was very disappointed and panicked. So I rang my surgeon who told me to go to Orthotics at his hospital.

I was well received and the orthotics guys are genius, they fixed the brace and put it back in position.

I had to have it fixed three times during these four weeks. Was starting to worry if it had effected my repair of the pec.

I patiently and desperately waited for July 18th to see my surgeon.

Jul 18th  2005
Went to see my surgeon. He told me operation was a success and gave me a basic sling. I was ecstatic after all the worry about the brace.

I ate good and found I could sleep in a bed settee on my back where the arm was supported against the side. Bliss, it was.

July 29  2005
Saw the shoulder physio specialist. We began with pendulum exercises and some passive stretches. This was a relief and I slowly gained motion back for the next 4 weeks. However was painful around the wrist , did mention to physio who I saw over the next few weeks. She said it may be caused by over compensating, so did not worry.
Flexibility improved greatly over the next few weeks and I noticed the muscles on the left side where small and tight.

It came in spurts, some days no improvement, some days a bit more range of motion.

Sep 30th  2005
Saw Mr Funk again. He said I had good range of motion and should start to train light.

Sep 30th  - Early Dec 2005
I worked with dumbbells and high repetitions and felt muscle coming back quickly, however my left wrist was very weak. I did not think about strapping it in hindsight, but I should have.

I stayed away from using the bar exercises and initially could only dumbbell press 2 kilos on my left side in flat dumbbell press, arm was shaking like a leaf. I put this down to weak tendons in the wrist and did not worry.

Throughout out this period I continued stretching and gained about 95% full range of motion.

My arm strength came back quickest. Chest was slow work but mainly because of my left wrist. The actual pec repair never troubled me.

I did not know at the time but was sure something bad was wrong with my wrist.

I saw a local physio who is state registered and chartered. She said I had over tight Flexor Digitorum Longus and there was some wastage around the wrist. She told me to strengthen the wrist muscles . so I once again thought it was nothing serious.

I continued training but the wrist still bothered me.

I saw my surgeon early Dec he said I may have intersection syndrome. He referred me to a Hand Specialist.

Dec 23 2005
Saw the hand specialist and he confirmed I had De Quervains syndrome. I was told to use NSAIDs and splint at night . using a futuro wrist and thumb splint.

Jan  11 2006
Had a session with the bodybuilding physio, Stuart Cosgrove, which was quite aggressive (stretching part was aggressive) and regained last bit of range of movement in shoulder. He advised to tape wrist tightly while training and gave me some exercises to strengthen wrist and thumb.

After the session I followed his advice and noticed my training improved greatly. But wrist was still stiff. I decided to bite the bullet and take a cortisone shot in the tendon sheath compartment. I am aware that cortisone is catabolic but thought here would be no harm from one shot.

Jan 21 2006
This is my experience . I have no doubt in my mind my surgeon and his supporting team are world class at what they do.

They have given me hope. And if not for the wrist I think my pec recovery would have been incredible. I still think its been a good recovery. 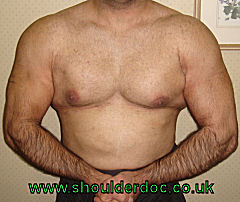