Speed's test was originally designed to assess for pathology of the long head of biceps in its groove but has also been utilised in the assessment for SLAP lesions.

The patient's elbow is extended, forearm supinated and the humerus elevated to 60°. The examiner resists humeral forward flexion. 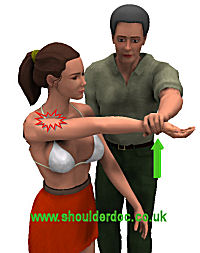 Pain located to bicipital groove. This is commonly interpreted as suggestive of inflammation or lesions related to the long head of biceps or biceps/labral complex.

Bennett's prospective study of all patients who presented with shoulder pain between Oct 1 sI 1994 - February 28 1995 correlated the clinical results of the Speed's test with biceps/labral pathology by direct arthroscopic visualisation.

46 shoulders in 45 patients were operated on during this time. Speed's test was positive in 40 shoulders. Biceps/labral pathology was present in 10 of these patients.

He concluded that the Speed's test is a non-specific but sensitive test for macroscopic biceps/labral pathology. However it is positive with a various number of other shoulder pathologies.