Initially  shoulder  arthroscopy was  used  for diagnostic purposes alone. Such studies soon showed that clinical diagnosis was often incor­rect and that shoulder arthroscopy could diagnose many conditions accurately. Cofield1 reviewed 74 diagnostic arthroscopies and found that in 32 per cent, arthroscopy was important in making, confirming or modifying the diagnosis or in altering the course of treatment. In a further 45 per cent, it was optional and in only 23 per cent was it unneces­sary. In trying to establish which modality gave a firm diagnosis, Cofield found that arthroscopy was twice as accurate as a combination of history, examination and routine radiographs.

Patients aged 18-35, with recurrent shoul­der discomfort following trauma: It is becoming clearer that pain following trauma to the shoul­der in young people is often due to instability. Rowe and Zarins' classic paper3 describing transient subluxation and the dead arm syn­drome initially brought this to the attention of the general orthopaedist, but this can be a difficult diagnosis to confirm.

Shoulder arthroscopy can be useful in this group, particularly if a Bankart lesion is present.

Damage to the inferior glenohumeral ligament, with or without a Bankart lesion, and damage to the middle glenohumeral ligaments are further pointers. There may be a Hill-Sachs lesion on the humeral head, some of which may be cartilaginous only, and therefore not show up on a Stryker Notch (West Point) radiograph. A loose body in the joint is most commonly associated with a Hill-Sachs lesion following an episode of dislocation, and damage to the anterior glenoid rim may be a further indication of recurrent subluxation.

Just as important as shoulder arthroscopy in this group is the examination under anaesthetic (EUA). This is a load and shift test and is described on page 36. To many surgeons, the EUA is actually more important than arthro­scopy in recurrent subluxation. Certainly it should never be omitted. EUA should be performed before the arthroscopy, as it is easier in a fresh joint, before distension has been carried out. The problem with performing the EUA first is that it may cause intra-articular bleeding, but this can be controlled by adequ­ate lavage (Figure A).

Patients over 35, with chronic subacromial impingement: To the shoulder surgeon, the painful arc is one of the most common presen­tations. Typically, patients complain of a painful arc of movement in the range of 70 to 120 degrees of elevation. If this does not settle within six months, with either physiotherapy or local installation of one injection of steroid, then arthroscopy is indicated (Chapter 8).

The arthroscopist has the advantage over the radiologist in that the superior surface of the rotator cuff can be visualized as well, by performing a bursal endoscopy. The classic impingement lesion, an area of 'hairy degener­ation' of the superior surface of the rotator cuff, may be seen (Figure F), or there may be a partial tear or ruffling up of the cuff. Any abnormality of the cuff can be probed, giving further tactile information. Partial thickness tears, which would not be visualized arthro-graphically, or areas of inflammation can be seen (Figure G) and probed. Tendinitis of the long head of biceps (Figure H) may be a marker of impingement and cuff tear. 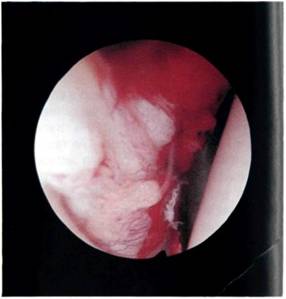 Figure A: Bleeding from a Bankart lesion following examination under anaesthetic can be controlled by lavage. 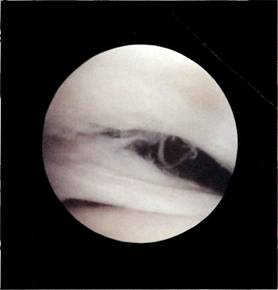 Figure B: A full thickness rotator cuff tear above the humeral head. 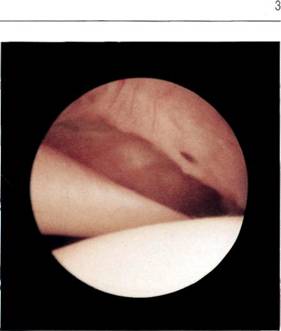 Figure C: The rolled mature edge of a rotator cuff tear next to the long head of the biceps tendon. 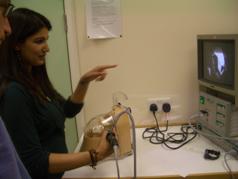 Figure D: The insertion of supraspinatus next to the long head of biceps.

Figure E: The bare area of the humeral head. 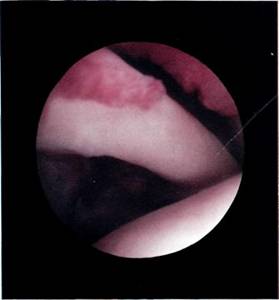 Figure F: The impingement lesion, a 'hairy degeneration' of the superior surface of the rotator cuff.

Atypical shoulder pain: In the past, this had to be managed empirically, for a definite diagnosis could not be made. Under these circumstances, arthroscopy can be of great value. In particular, the following diagnoses can often be missed clinically:

—    glenoid labral tears, which may give inter­mittent shoulder pain or unpredictable lock­ing or catching of the joint

—    instability with no good history of initial dislocation

Failed previous shoulder surgery: With patients whose symptoms persist after open shoulder surgery, the first factor to be consi­dered is whether the original diagnosis was correct. As discussed, Cofield's work1 makes clear that clinical diagnosis is an unpredictable art. For this reason, shoulder arthroscopy can be useful. Diagnosis may be changed or confirmed, or a second pathology revealed.

However, assessment of the rotator cuff can be very difficult after previous open surgery. For example, the arthroscopist may be misled when thin scar tissue gives the impression that the cuff is intact, although mechanically the cuff behaves as if it were disrupted. Cuff function is dependent on a good mechanical reconstruc­tion with full thickness cuff material. Furth­ermore, adhesions may develop in the sub­acromial bursa, making visualization of the cuff repair difficult (Figure I).