The Bony Apprehension Test for Instability of the Shoulder: A Prospective Pilot Analysis

Purpose: We performed a prospective pilot study of the "bony apprehension test," in which apprehension is experienced at or below 45° of abduction and 45° of external rotation, as a means of screening for a significant bony lesion causing instability of the shoulder.

Conclusions: The bony apprehension test can reliably screen for significant osseous lesions. In this study it was more sensitive than plain radiographs, as shown by a higher sensitivity for the test (100%) than for preoperative plain radiographs (50%). Level of Evidence: Level II, development of diagnostic criteria based on consecutive patients with universally applied gold standard. 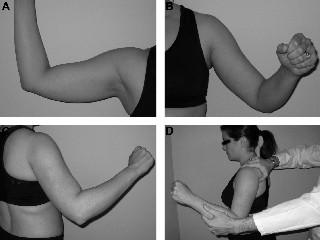 (with permisssion from original article)