Positive Effect of an Autologous Platelet Concentrate in Lateral Epicondylitis A double-blind randomized controlled trial: PRP versus corticosteroid injection with a 1 year follow-up.

References: International Meeting on the use of Autologous Growth Factors in Orthopaedics and Sports Medicine: "State of the Art" - Krakow, Poland - 24 April 2009

Context: Platelet Rich Plasma (PRP) has shown to be a general stimulation for repair.

Objectives: To determine the effectiveness of PRP compared with corticosteroid injections in patients with chronic lateral epicondylitis.

Design: A double blind randomized controlled trial with a one-year follow-up between May 2006 and January 2008.
Setting: The trial was conducted in two teaching hospitals in The Netherlands.
Patients: 106 patients with chronic lateral epicondylitis were randomly assigned in the PRP group or in the corticosteroid group. Randomization and allocation to the trial group were carried out by a central computer system.
Intervention: Patients were randomized to receive either a corticosteroid injection or an autologous platelet concentrate injection through a peppering needling technique.
Main Outcome Measures: The primary analysis included VAS and DASH scores. 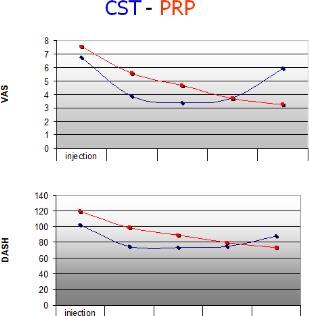 Conclusions: Treatment of patients with chronic lateral epicondylitis with PRP reduces pain and increases function significantly, exceeding the effect of corticosteroid injection. Future decisions for application of the PRP for lateral epicondylitis should be confirmed by further follow-up from this trial and should take into account possible costs and harms as well as benefits.
Trial registration: ClinicalTrials.gov. Identifier: 2007-004947-31. http://www.clinicaltrials.gov

This is probably the most convincing evidence so far for the benefit of PRP for persistant tennis elbow and demonstrates similar success rates to surgery with a 75% success rate in significant pain improvement.