Predicting the outcome of any treatment intervention can be a complex and multifactorial, as well as a potentially controversial undertaking.  Before understanding the factors influencing the outcome of subacromial decompression it is important to understand the indications for the procedure, the limitations and influencing factors. 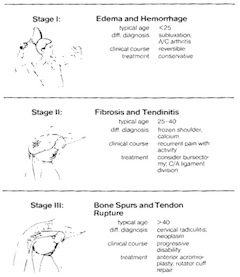 Charles Neer originally proposed the term subacromial impingement in 1982 {5}.  Neer described a progressive disease progress ranging from rotator cuff oedema and haemorrhage (Stage I) progressing to fibrosis and tendon inflammation (Stage II) and the end stage being bone spurs and tendon rupture (Stage III){5}.  There have been numerous studies associating acromial shape and morphology with subacromial impingement along with pressure studies, supporting the extrinsic impingement theory.

However, over the past ten years the extrinsic theory has been challenged.  Lewis in 2011 {4} where he has summarised the evidence demonstrating a lack of concordance regarding the area of tendon pathology and supposed acromial irritation, the shape of the acromion and its relationship to impingement symptoms, the proposal that the irritation causes tendonitis and bursitis and the poor correlation of imaging and surgical changes with symptoms.  He has suggested the term “subacromial pain syndrome” which reflects the pain related to the bursa rather than the mechanical impingement effect.  His model in BJSM 2010 suggests the progression from a normal tendon to a reactive tendonopathy to tendon disrepair and subsequent degeneration (Figure 2).  This model is based on the supporting literature for an intrinsic cause of subacromial impingement pain with dysfunction of the rotator cuff leading to the bursitis and impingement symptoms.  Looking back this theory has been supported and originally published by Codman in 1934 {6} who demonstrated that the rotator cuff degenerates within the substance of the tendon and frequently along the inferior margin of the tendon rather than on the bursal surface.  Codman stated “I am confident that these rim rent tears account for the great majority of sore shoulders”.

When to perform a subacromial decompression

Prediction of outcome from subacromial decompression is multi-factorial determining whether the impingement syndrome symptoms are due to a predominant primary structural cause or secondary functional cause is essential to achieving a good outcome from treatment and surgery.  The majority of impingement patients once secondary factors have been eliminated is that the vast majority (80%) should improve with non operative intervention using a supervised SCEP.  Consideration of the functional secondary causes in younger patients and the structural space occupying caused in older patients and treating these accordingly is essential to a good outcome.  Other factors such as psychosocial secondary gain and central sensitisation should also be considered in determining the best treatment and predicting outcomes.  A more customised approach and pathway to managing these patients is recommended with early imaging in those without good response to symptom modification procedures.  Further work into the understanding of the intrinsic workings of the rotator cuff will improve both our understanding and treatment outcomes in the future.