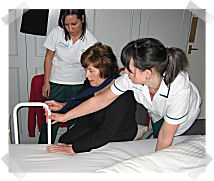 When I hurt my shoulder very badly and found I needed surgery I was more than usually apprehensive.  This was because  I rely on my arms and shoulders almost entirely.  I suffered polio as a child in 1947 and have worn calipers and used walking sticks ever since. I  have no balance without sticks, and have to use my arms to push myself up from sitting position, in and out of the bath, the car, etc.

Prior to surgery occupational therapists came to my home to assess what aids would be of help after the operation.  These included a manual wheelchair which could be operated with only one hand.  When the equipment  was delivered a practice session took place with the O.T.’s which was very helpful.

Back home following the operation I found I managed much better than I had anticipated.  The equipment identified by the O.T.’s was useful and, importantly, enabled me to cope with personal care.

The surgery itself was not as painful as I had anticipated and now, four months on, it is wonderful to be virtually pain free, able to sleep well and with a good range of movement in my shoulder.

Janet has kindly offered to be available via email for anyone who would like further advice and guidance. Click Here to send her an email.

Janet was referred to OT in April 2004 for a pre-operative home assessment because of concerns that she may have some difficulties maintaining her independence with daily living tasks immediately following surgery. Although there are no restrictions to movement of the shoulder following this surgery, potentially Janet may initially find it painful to use her right arm and this could affect her ability to perform some activities.

Janet had Polio as a child which caused her to have lower limb weakness, meaning that she is only able to walk short distances using two sticks and needs to use a wheelchair. Prior to the operation Janet was also experiencing shoulder impingement which caused pain and stiffness in both shoulders, more significantly in the right shoulder for which the surgery was planned.

A pre-operative home assessment was completed on 19/04/05 where the OT assessed the home environment and discussed Janet’s current abilities in managing daily living tasks. As she has grown up with this disability, Janet has found ways of managing to do daily activities without needing too much equipment or any help from Social Services. She was understandably keen to maintain her independence and the goal of OT was to support her in doing so.

A number of activities that Janet may find difficult initially following the surgery were identified by OT on the initial visit. A follow-up home visit was completed to address these potential problem areas and during this visit any necessary equipment was fitted.

OT involvement was as follows: