In October 2002 I fell and damaged my left shoulder. This restricted the movement of my arm so that I could not move it out to the side or up in front, it also interfered with my sleep as I could not lie on either my left or right side without getting severe pain in the whole of my arm, this was only relieved by sitting up.

The difficulty caused the lack of movement to the arm was compounded by the fact that I am a right leg amputee and need to use crutches to get around. The damage to my shoulder meant that I was unable at first to put any weight on to my arm, this did ease as time went on so that I was not restricted in my mobility hut the movement to the arm and the pain at night did not get better.

When I was examined at the hospital it was found that I had torn a muscle in my shoulder and that I would need an operation to try and fix the damage that would require me to have my arm in a sling for up to 12 weeks. Once it had been decided on the course of action to take to repair the damage to the shoulder, the first thing I had to do was see the physiotherapist who showed me what exercises to do to ensure the shoulder would not sieze up.

A few weeks before I was due to go into hospital to have the operation I saw the Occupational Therapist (OT) who showed me the sling I would have to wear and how to get dressed and undressed without moving my arm. As I stated earlier the main problem was always going to be mobility. I live in a three bedroom semi-detached house which meant I was going to have trouble getting up and down stairs, as I have a family (3 children) it was not practical to move my bed down stairs. To find a way round this problem the OT came to my home when we decided the best way for me to get up and down the stairs was on my bottom, but I then had the problem of how to get from the stairs to the standing position so that I could hop to either my bedroom onto the toilet. This problem was overcome by putting a handle at the top of the stairs and a small stool on the landing so that when I got to the top of the stairs I could pull myself up by the handle sit on the stool and then stand up.

As I have been an amputee for around 20 years I have no trouble in hopping so I was able to get around the rest of the house little difficulty. There were only two other difficulties to overcome - the first one was getting in and out of the house as there is a step to negotiate we overcame this by simply putting the stool from the top of the stairs next to the front door. The final problem was having a shower, as it was hard to balance without moving my arm and thereby running the risk of banging the shoulder again. This was overcome by making a seat that simply fit across the bath that I sat on whilst I had the shower. (I still use the seat). 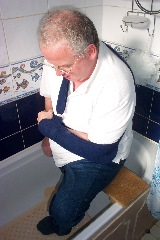 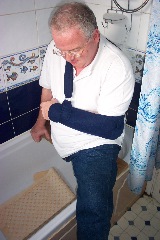 When I had the operation I stayed in hospital for a few days longer than normal as my wife is a nurse and she was working shifts so they wanted to ensure that there was someone at home when I was discharged plus the staff wanted to ensure that I was steady when standing. As well as the practical side of things (mobility) the other main problem I had to overcome was the feeling of boredom and the feeling that I was useless, as I had to rely on others to do the simplest of tasks.

Since I had the operation the pain has completely gone and the movement is slowly coming back. I am back at work and fully mobile.