Decompression of the Rotator Cuff for Impingement Syndrome

Surgery is indicated if conservative therapy has failed. Neer has described three differ­ent stages of the impingement syndrome.1 Stage 1 is reversible edema and hemorrhage present in a patient under 25 years of age. Stage 2 is fibrosis and tendonitis affecting the rotator cuff of a patient typically 25 to 40 years of age with pain that recurs with activ­ity. Stage 3 is bony spurs and tendon ruptures present in people mainly over 40 years of age; night pain may be a feature.

It must be emphasized that the vast majority of patients with impingement syndrome are treated successfully by conservative means:

Anterior acromioplasty is advised at the same time as any rotator cuff repair to decompress the repaired tendon and allow an adequate new blood supply for repair. This may also be combined with excision arthroplasty of the acromioclavicular joint, depending on symptoms and pathology.

Other Procedures in Which Impingement Is Likely

Impingement is also likely in total shoulder replacement in patients with rheumatoid arthritis or old fracture.

Irreparable Tear of the Rotator Cuff

In those in whom the rotator cuff is considered unsalvageable and no muscle slide or shift is possible, then decompression by anterior acromioplasty excision of the cora-coacromial ligament and debridement of the remaining elements of the cuff may well provide adequate pain relief as long as the deltoid remains strong.

It has been noted that results are much better in those for whom the stiffness has resolved before surgery but pain is still a feature.

The impingement syndrome is essentially a clinical diagnosis. The history is the most helpful part of the investigation. The history of recurrent pain in the shoulder on repet­itive exercise above shoulder height that resolves with rest, recurs with exercise, and is worse at night is indicative of impingement syndrome. On examination, a midrange painful arc of motion that is relieved by a subacromial injection of local anesthetic is con­firmatory evidence.

Stage 1 shows no obvious changes, but stage 2 can show some sclerosis of the under-surface of the acromium (the eyebrow sign), which may or may not have an opposing "kissing lesion" of sclerosis of the greater tuberosity. Either of these are signs of a rota­tor cuff in distress. In stage 3, subacromial osteophytes may well be present, and some slight sclerosis of the humeral head and spur formation also may be present.

The patient is positioned for the true scapula lateral radiograph with the tube angled caudally 5 to 10 degrees. This views the space available for the suprasprinatus tendon unit as it passes under the coracoacromial arch. The shape of the acromion can be eas­ily seen on this view. Bigliani et al.[2] have identified three distinctive acromial shapes on this view:

Type 3 is thought to be associated with impingement.

Ultrasound can be useful and reliable in determining a rotator cuff tear, but it is not par­ticularly helpful in assessing impingement. The same is true of arthrography.

Magnetic resonance imaging is becoming of increasing use and with better specific shoulder coils, interpretation of these scans is increasingly sophisticated, such that early degenerative change in the cuff can be noted.

Subacromial bursoscopy is certainly the most reliable means of confirming the clinical diagnosis. The bursa is entered using the arthroscope, and the impingement lesion on the superficial surface of the rotator cuff can be seen. This is an area of roughening and localized inflammatory change. Also, the undersurface of the acromion may be seen to be abraided, eburnated, and injected.

The patient is positioned in the standard shoulder position supine beach chair posture with a small sandbag under the right shoulder thrusting it forward with an arm board attached to the side of the table.

A superior strap incision is made centered just slightly laterally to the acromioclavicular joint over the center of the anterior tip of the acromion. The length of the incision must vary as to the depth of superficial fat, but usually in the order of 5 to 6 cm (Fig. 4-1).

Skin and subcutaneous tissue are incised, and hemostasis is achieved from persistent skin edge bleeding vessels. The line of fibers of the deltoid does not run in the line of the incision. The fascia overlying the deltoid is incised in the line of the deltoid fibers such that the apex of the split comes to lie at the level of the acromioclavicular joint extend­ing distally. Because there is a continuous deltoid attachment around the acromion, some fibers must be detached (Fig. 4-2). It is therefore vital that these fibers are removed in such a way that they can be replaced at the end of the operation in a secure fashion. A transverse incision is made on the superior aspect of the acromion through the perios­teum, and an osteoperiosteal flap is raised both laterally and medially so that a good layer of tissue is made that can be sutured together at the end of the operation. 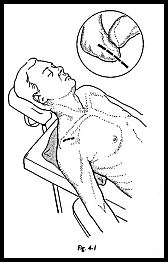 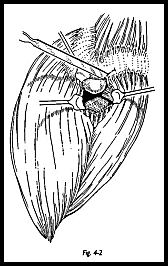 Lying immediately deep to the anterolateral tip of the acromion lies the coracoacro­mial ligament with oblique fibers stretching horizontally toward the coracoid. The fibers of this can be more easily seen if a rougine over a swab is used to push the soft tissue medially (Fig. 4-3). 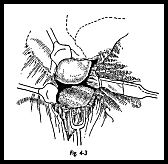 At this stage, it may be instructive to abduct the arm while observing the lateral mar­gin of the coracoacromial hgament. If there is any swelling or inflammatory change in the subacromial bursa, then this will be seen to ruck up against the edge of the cora­coacromial ligament with palpable crepitus. The margins of the coracoacromial Hgament should now be defined, separating it from the clavipectoral fascia. The origin is defined as the whole of the anterior margin of the acromium. The anteroinferior part of the acromion is now removed using an oscillating saw (Fig. 4-4). Any bone of the acromion lying anterior to the acromioclavicular joint is removed with this fragment.

The line of the osteotomy should be such that when the fragment of bone has been removed the line of the osteotomy is continuous with the undersurface of the acromion so that no hooking or beaking remains. The fragment of acromion with attached cora­coacromial ligament is then traced medially and excised from near its insertion to the coracoid (Fig. 4-5). The arm is then pulled distally by an assistant, and the undersurface of the acromion is palpated for any remaining spurs or rough edges of bone. If any frag­ment of bone remains, this can either be burred flat with a power shaver or with hand­held nibblers to smooth off the whole undersurface. 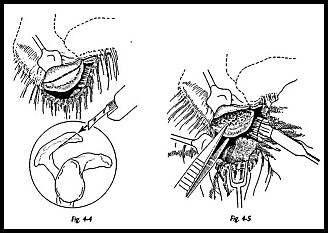 The purpose of the operation is to decompress the anterior rotator cuff. Other possi­ble causes of impingement must now be investigated. The undersurface of the outer end of clavicle is palpated for inferior osteophytes from a degenerate acromioclavicular joint. If these are present, then the osteophytes alone can be removed. If, preoperatively, signs and symptoms and radiograph evidence of degenerative change were seen within the joint, then the acromioplasty may be combined with excision of the outer end of clavicle.

The rotator cuff is now inspected for any unsuspected tears. If a tear is found, it can be repaired at this stage through the same deltoid split approach. By rotating the arm underneath the wound, the whole of the rotator cuff can be visualized without extend­ing the wound.

An attempt is made to partially close the subacromial bursa with fine suture to give a layer of tissue deep to the raw surface of the acromion (Fig. 4-6). The most important step in closure is to reconstitute the whole of deltoid. The small area of deltoid that 'was detached from the anterior acromion is now sutured to the osteoperiosteal flap on top of the acromion at the outer end of the clavicle. This must be a good strong repair to allow immediate postoperative movement. The superficial layers of skin are then closed with­out drainage with a subcuticular suture, then the suture line is infiltrated with 0.5 per­cent bupivacaine.

Gentle passive assisted exercises are started on the day of operation and the morning after as pain allows. A sling is used for comfort, but not to immobilize the arm. Patients are shown pendulum exercises to gently begin mobilizing, but are told to start using the shoulder actively as soon as pain allows. They are told that nothing has been done that can be ripped open, and the earlier mobility is regained the better. Stiffness is a most unusual complication following this operation, and hence patients are allowed to follow their own program of mobilizing during the first week. No benefit has been found in pushing patients too early if they are in discomfort. At one week, they are seen by the physiotherapist, 'who will increase their range of motion exercises. At 3 weeks, strengthening exercises are started. If patients are keen to start strengthening exercises before this, they are allowed to do so. Patients are told that it can take 3 months to get the full benefit of the procedure, and during this time they are to avoid repetitive work above shoulder height and repetitive sporting activities above shoulder height, such as serving at tennis.

In looking at series of failed acromioplasty, the large majority appear to have been done for the wrong indication. If done for the correct indication, acromioplasry is an extremely reliable procedure. The incidence of failure ranges from 3 to 11 percent.3 It appears that results are 'worse if stiffness and pain were preoperative features, and it is recommended that preoperative physiotherapy be encouraged to regain the range of motion before surgery. Return to high-level athletics or occupations cannot be guaran­teed. Only 43 percent return to preinjury level of competitive athletics.4 Only 4 of 18 returned to competitive throwing. 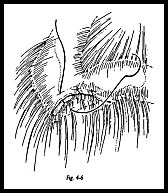 Failure of deltoid reattachment can be seen clinically as a wedge defect anterior to the acromion where the deltoid has been avulsed.

Patients with postoperative scarring usually have a history of postoperative hematoma formation, pain, and inadequate early mobilizing following surgery. It is worthwhile with this group to reoperate to break down adhesions (this may best be achieved arthroscopically).