The main indication for manipulation under anesthesia is primary idiopathic frozen shoulder. It is important to distinguish between this and post-traumatic stiffness, which does not usually respond well to manipulation. The ideal time for manipulation of the frozen shoulder is at the stage when night pain is decreasing but the stiffness has reached a maximum. Physiotherapy at this stage usually makes the shoulder more painful but is of course invaluable immediately after the manipulation and possible injection.

Frozen shoulder associated with insulin-dependent diabetes does not respond well to manipulation under anesthesia, often refreezing within 2 to 3 weeks. If there is any history of postirradiation fibrosis, then this may well lead to loss of elasticity in the brachial plexus and put the plexus in jeopardy of a traction lesion.

The elderly, frail, and osteoporotic should not be manipulated for fear of causing a fracture of the shaft or proximal humerus.

The patient lies supine under general anesthesia with the head resting on a head ring, and if the patient is being manipulated on a trolley, the stretcher pole is removed from the affected side (Fig. 3-1). The surgeon should stand at the head end of the table with one hand stabilizing the scapula in the resting position (Fig. 3-2). The surgeon's other hand should then be placed in the patient's axilla such that the surgeon's forearm is resting against the whole of the inside of the patient's arm. First, abduction is taken to the patient's free limit, and then the patient is forcibly abducted while the scapula is maintained down in the anatomic position. The scapula must not move at any stage. This maneuver will rupture the inferior capsule. The shoulder is then forcibly adducted such that the affected elbow is pushed in front of the patient's chin to rupture the posterior capsule (Fig. 3-3). Finally, forcible external rotation and internal rotation are added, but great care is taken here because it is during these final rotation maneuvers that a spiral fracture can be caused.

At the end of the procedure, the patient will benefit from injection of a longer acting local anesthetic, such as bupivacaine, 20 ml 0.5 percent. A steroid may also be added, such as depome-drone or triamcinolone, to reduce postoperative adhesion formation and swelling. It should be arranged that the physiotherapist sees the patient in the recovery room so that physiotherapy may be started immediately. It is important that the patient sees the shoulder in the fully abducted or elevated position immediately after the maneuver so that they realize that this is possible and achievable by physiotherapy thereafter. For the first few days, daily physiotherapy is encouraged, and a home exercise program is begun whereby the patient is asked to put the shoulder through the maximum range of movements, stretching to extremes at least three times a day. The patient should have been prewarned that this may be a very uncomfortable 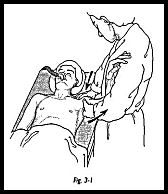 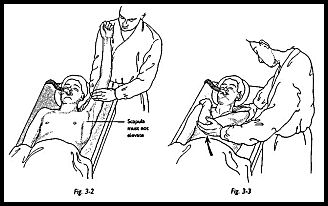 procedure. Although the majority of patients undergo physiotherapy as outpatients, occasionally, a patient may have to be hospitalized for pain control. Although the shoulder may have been manipulated through a full range of movements under anesthesia, this is rarely gained immediately after recovery and it may take several weeks to regain the range of motion. Recovery from this procedure can be extremely variable. However, if the shoulder gives with one definite snap during the manipulation, then a good result is usually achieved quite quickly. However, if the shoulder has a plastic, slow giving way during manipulation, then unless the patient is strongly motivated, this type of shoulder is likely to refreeze.

Two main complications can arise from manipulation of the shoulder: (1) a traction lesion of the brachial plexus, which is unlikely if the -scapula is not allowed to rotate or elevate out of its anatomic position, and (2) fracture of the shaft of the humerus, which is unlikely if the manipulation is carried out in the order described with the initial abduction maneuver undertaken 'with the force applied through the 'whole length of the humerus.