Biceps tendonitis and attrition failure of the long head of biceps are part of the impingement syndrome of the rotator cuff. Primary true traumatic rupture of the long head of the biceps is an unusual event and much more commonly associated with degenerative change. If consider­ing either repair or tenodesis, then decompression must also be part of the procedure. Anterior acromioplasty and excision of the coracoacromial ligament are routinely done at repair or fixa­tion of the tendon.

Repair is indicated for a history of acute rupture of biceps tendon associated with significant trauma in a patient under 50 years of age. Repair then stands a reasonable chance of success, but the final decision must be made at the time of exploration of the tendon to assess whether trauma or attrition was the major component in failure.

Normally, attrition rupture of the long head of the biceps in the late middle-aged and the elderly is a relatively painless problem. Acute bruising and pain may occur at the time of rupture, but after a few days, the bruising and discomfort settle, strength is gradually regained, and apart from the slightly odd cosmetic appearance of bunching of the biceps muscle in the arm, no problem results. However, in some, pain persists, and they cannot accept the cosmetic deformity of the "Pop-Eye" muscle in the arm. Tenodesis is indicated in these patients.

The first part of this operation is an anterior acromionectomy and excision of the coracoacromial ligament as described in Chapter 4. Using this strap incision and split in the deltoid as a window to view the cuff, the arm is internally rotated and the biceps groove palpated. A window is made in the biceps sheath with a flap of bone so that this can be re-repaired at the end of procedure. The biceps is inspected proximally and the stump found (Fig. 5-1). If this has retracted proximally, then the rotator interval may need to be opened to chase the long head of the biceps into the shoulder joint. 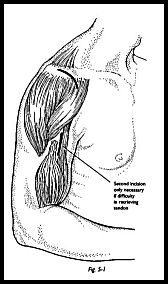 If this injury is the result of an acute traumatic episode in a patient under 50 years old, then consideration must be given to repair the tendon via standard grasping type suture end-to-end repair. This is a rare event, however, and in the majority, tenodesis is the only realistic option.

The proximal stump of biceps tendon is excised to prevent "catching" in the joint. The distal groove is now explored to see if the distal stump of the tendon is palpable. Almost certainly, this will not be found from the shoulder wound, because it will have retracted too far distally, and a separate wound must be made (Fig. 5-2). A 3-cm incision is made over the most proximal part of the bunched up biceps tendon in the upper of the arm ante­riorly. A finger is passed into the wound, and the long head of the biceps tendon is found. A suture passer is then passed from proximal to distal to emerge in the distal wound. A stay suture is passed through the distal stump of the biceps tendon, and then the suture is passed through the eye of the suture passer and pulled out proximally to deliver the ten­don in the proximal wound (Fig. 5-3). 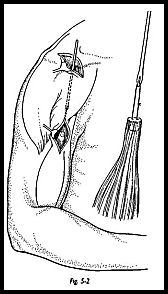 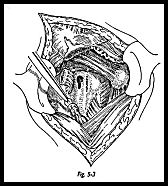 The tendon is then tenodesed to the groove by the keyhole method.1 The proximal ten­don is tied in a simple knot, the knot is held in place by a through and through suture. A clip is applied to the proximal end of the tendon and pulled so that the tension is judged to be correct. The position of the distal end of the knot is then marked in the biceps groove, and a keyhole defect is made in the base of the groove (Fig. 5-4). This is best made with a drill and dental burr to get the sizing exactly right. With the elbow flexed to relieve tension on the biceps, the knot is passed through the larger, upper end of the keyhole and the tendon just distal to the knot, and pushed down into the slot so that the knot is held in place by distal pull of the tendon. The elbow is straightened. The flap window over the biceps groove is secured over the knot.

The arm is placed in a sling with the elbow flexed for 3 weeks. During this time, gentle passive flexion extension of the elbow from the 90-degree flexed position of elbow is started, and 'when this is relatively pain free, active motion can be started within the 3-week period. The sling is discarded after 3 -weeks. 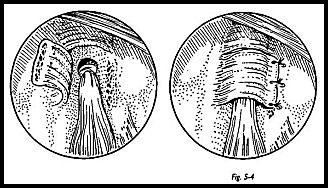