Stabilization of the Biceps Tendon

If the tendon has become very thin and attenuated, then stabilization is pointless, because it will almost certainly rupture later. Tenodesis is the better option.

If the diagnosis is suspected, then arthrography and screening can be very helpful in delineating the tendon as it subluxates out of the groove.

Plain biceps groove radiographs can be helpful in showing that the anterior edge of the groove is very flattened and that the groove has become shallow. Essentially, this is a clin­ical diagnosis; the patient may complain of the snapping and giving-way sensation in the shoulder. This may be experienced when the elbow is powerfully flexed in external rota­tion of the shoulder causing sudden onset of pain and tenderness over the biceps groove.

The exposure used depends on the indication. If the prolapsing tendon is an incidental finding at rotator cuff repair, then the exposure is that for the rotator cuff repair. If the indication is primary traumatic subluxation of the tendon, then a deltoid split incision is used over the biceps groove anterolaterally (Fig. 6-1). The deltoid is split longitudinally, but limiting the split to less than 5 cm from the acromion to protect the axillary nerve. 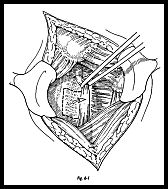 By rotation of the arm, the biceps groove is brought into view in the 'wound, and the diagnosis of the subluxing long head of the tendon is confirmed. If this is acute, the transverse ligament will be found to be ruptured and sometimes may have avulsed a small flake of bone, in which case this can be directly repaired back to its origin. More usually, it is a chronic situation; the anterior wall of the biceps groove has become very flattened and rounded, there is no remnant of the transverse humeral ligament, and hence a new ligament must be fashioned. The long head of the biceps is retracted anteriorly, an anteriorly based osteoperiosteal flap is made, and the proximal biceps groove is deepened with nibblers. The bleeding cancellous base in both the new groove and at the base of the osteoperiosteal flap is smoothed down with bone wax (Fig. 6-2). The long head of the biceps is laid in the new groove and underneath the newly raised flap.

The flap is then repaired over the top of biceps tendon using no. 1 polydioxanone (PDS) sutures through holes in the bone. The repair is then tested by flexing and extending the elbow in different positions of rotation of the shoulder. If this is satisfactory, the wound is closed in layers without drainage, and the arm is placed in a sling.

The sling is maintained for 3 weeks. During this time, passive mobilizing only is done with the physiotherapist. At 3 weeks an active program of elbow flexion extension with increasing power exercises is begun. Throwing is not allowed for 2 months. 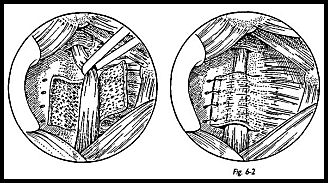