Posterior shoulder stabilization is indicated for chronic recurrent posterior dislocation of the shoulder. The initial traumatic event may have been direct trauma, indirect trauma associated -with internal rotation, postepileptic fit, or electric shock. Almost always self-reduced, it is usually a posteroinferior dislocation. If an adequate course of shoulder-strengthening exercises has been done, that is, emphasizing strengthening of infraspri-natus muscle, but the patient still experiences recurrent dislocation, then surgery must be considered. Any element of voluntary posteroinferior dislocation must be excluded. The patient usually complains of pain and instability with the arm in forward flexion, abduction, and internal rotation. Although trauma is the main predisposing factor in this group, most patients do have a significant element of joint laxity in the opposite shoulder and in other joints generally. Therefore, when considering surgery, two elements must be assessed: (1) the true mechanical component from glenoid retroversion and reverse Hill-Sachs defect (hatchet deformity) and (2) degree of joint laxity. If the degree of joint laxity is considered to be the major feature, then a capsular shift-type repair is indicated. In the presence of excessive glenoid retroversion, greater than 7 degrees, a posterior glenoid osteotomy is the procedure of choice.

Examination under anesthesia is very helpful to confirm that this is a true posterior dislocation. The arm is stressed in internal rotation, and the posteroinferior translocation force is applied. The opposite shoulder is tested to assess degree of generalized laxity. Arthroscopy may be helpful immediately before stabilization to determine the size of the impaction fracture in the head and to assess the degree of capsular laxity or tearing and the state of the glenoid rim.

The patient is positioned in the lateral position with the affected side uppermost.

The vertical incision crossing the spine of the scapula gives reasonable access and a better cosmetic result than the classic horizontal incision along the line of the acromion (Fig. 9-1).

The deltoid is split in the middle of the wound, and osteoperiosteal flaps are raised medially and laterally to expose the infraspinatus (Fig. 9-2). Care is taken to make sure the deltoid is not split more than 5 cm from the spine of the acromion to prevent damage to the axillary nerve. The infraspinatus is identified, and it can be difficult to expose the split between the infraspinatus and the teres minor. At the point of insertion of the teres minor on the humerus, there is a distinct prominence. This is traced more medially to split the two muscles. This interval can be developed without fear of damaging either suprascapular nerve or the axillary nerve. The infraspinatus is then retracted superiorly and divided separately from the capsule. 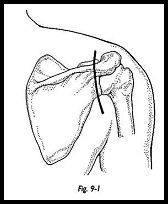 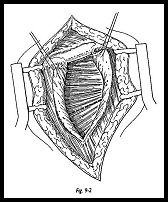 The capsule is then opened in a T-shaped manner with the T based laterally and the horizontal axis in the midpart of the humeral head (Fig. 9-3). The posterior rim of the glenoid is inspected for eburnation and wear, and the degree of retroversion is confirmed (Fig. 9-4). The scapula neck osteotomy is now made 5 to 10 mm medial to the glenoid face and parallel to it 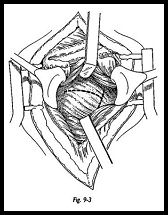 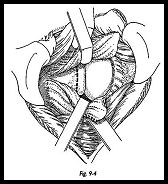 At this stage, the glenoid surface must be inspected to make sure that the osteotome does not pass through the articular surface. The initial cut is made with an oscillating saw, and then a sharp osteotome is used to prise the osteotomy open (Fig. 9-5). A triangular crest of bone is removed from the posterior angle of the acromion, and the natural curve of this bone is used to provide not only a wedge to block the osteotomy site open but also a posterior bone block. The osteotomy site is held open with the osteotome, and the graft is impacted into the osteotomy site, flush with the surface of the neck. No internal fixation is required, because the bone springs back together naturally (Fig. 9-6). At this stage, if posterior capsular laxity is thought to be a contributory factor, then the posterior capsular shift is added (see next section) 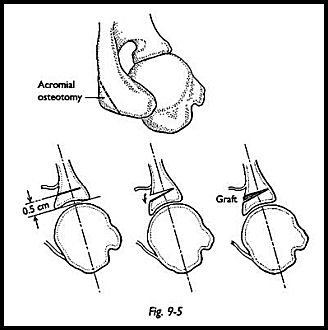 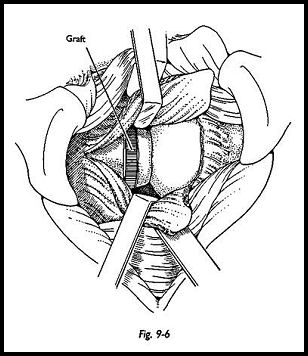 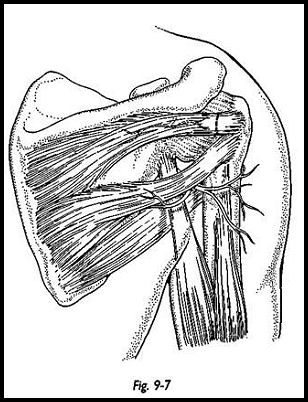 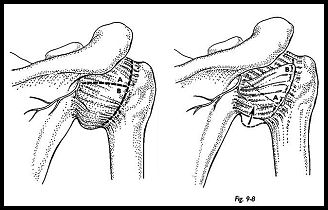 Rowe has shown that if the arm does not extend forward beyond the coronal plane, then the posterior dislocating shoulder is stable (Fig. 9-9). His method using an elastoplast splint has been found to be simple and effective. The patient is left free to flex the elbow and move the arm in extension for early motion, and the arm is not otherwise immobilized. The strapping is kept for 3 weeks, then removed. The arm is gradually allowed to regain flexion, abduction, and rotation. A sling with a body belt may be used for sleeping to restrain the shoulder. The patient is put on a program of resistive exercise with the emphasis on external rotation to strengthen infraspinatus and teres minor. Forward flexion and internal rotation of the arm in abduction across the body is discouraged until the arm has regained stabilizing strength and there is no apprehension on motion, which is usually approximately 6 weeks 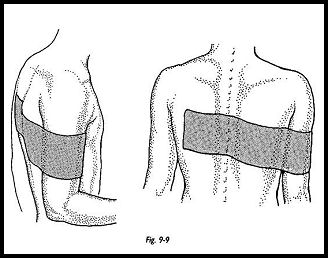