With the explosion of interest in arthroscopic surgery of the shoulder, it was inevitable that instability would be a target of surgical endeavor. Many methods have been described, none of which have been entirely satisfactory. The clinical results do not yet equal those of open surgery. Most methods have been directed toward the surgical repair of the Bankart lesion, that is, reattachment of the avulsed anterior and inferior capsule and ligamentous structures. This immediately limits the indications to those shoulders that have a Bankart defect. Various arthroscopic capsule shift procedures are still very much experimental. The earliest technique of Bankart repair was popularized by Johnson1 using a metal staple. Historically, the use of metal around the shoulder has an evil reputation for migration and secondary complications; hence this was generally unattractive, and the long-term results have been unfavorable. Other methods using sutures, suture anchors, screws and, more recently, biodegradable tacks, have been described. This chapter describes one example of suture fixation and the method using biodegradable tacks (Suretac).

Acute Traumatic Shoulder Dislocation The recurrence rate after primary traumatic anterior shoulder dislocation in young athletes is directly related to age but is approximately 80 percent after any kind of conservative treatment if the patient wishes to return to an active sporting life. There is little natural tendency for the detached labrum to reattach itself to bone, and if the shoulder is allowed to go on to chronic dislocation, then the labrum may become attenuated and abraded. It would be reasonable to advocate early arthroscopic fixation following the first dislocation. If the inferior glenohumeral ligament anterior labrum complex is still intact and healthy, and it does lower the recurrence rate, especially in young athletes. However, long-term prospective randomized studies still need to be done to confirm this indication.

Recurrent Shoulder Dislocation If arthroscopy shows an obvious Bankart lesion and that the anterior structures are in reasonable condition, arthroscopic fixation should be considered. The capsule can be reattached to the anterior glenoid neck to retension the inferior glenohumeral ligament complex. The ideal patient has unidirectional instability that is post-traumatic, anterior, or anteroinferior, with a definite Bankart lesion.

The presence of a Bankart lesion is then confirmed. The quality of tissues, degree of separation, and amount of anterior or inferior capsular laxity are assessed. A sharp rasp is then passed through the anterior cannula, and the Bankart lesion is extended down to the 6 o'clock position of the glenoid face, so that the entire anterior glenoid ligamentous complex is mobilized. A motorized shaver is then used to decorticate the extent of the anterior glenoid neck from the 2 o'clock to the 6 o'clock position such that the bleeding cancellous surface is prepared. Using a Caspari suture punch, or shoulder stitcher, multiple monofilament PDS sutures are passed through the superior portion of the inferior glenohumeral ligament (Fig. 12-1). The suture ends are then all brought out through the anterior portal, and by traction of these sutures, the inferior glenohumeral ligament can be retensioned such that the whole inferior capsule fits snugly back again around the glenoid neck. 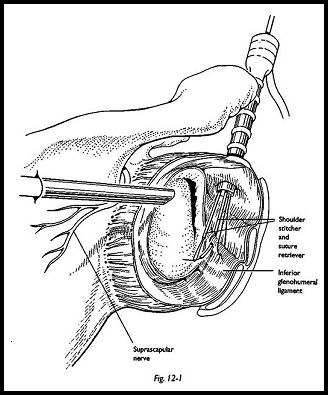 A suture pin using a guide system is then drilled through from anterior to posterior, entering on the most superior portion of the glenoid neck and exiting at a point approximately A to 5 cm inferior to the scapular spine and less than 15 degrees medial to the articular surface of the glenoid (Figs. 12-2 and 12-3). A small skin incision is made over the tented skin. The three sutures previously placed in the inferior glenohumeral ligament have been tagged to separate their ends. Hence, one group of suture ends from one hemostat are passed through the eye of the suture pin, and the suture pin is pulled through posteriorly "with a pair of pliers, so that one end of the sutures exits posteriorly. A second suture pin, using the guide system, is passed from anterior to posterior and is used to pass the other three ends of the sutures from anterior to posterior. It is aimed to bring both suture pins to exit through the same skin wound, but there 'will be a bridge of soft tissue between the suture pin and themselves. Each group of three suture ends is tagged, and by pulling on these, the Bankart defect can be seen to be obhterated by observation through the scope. 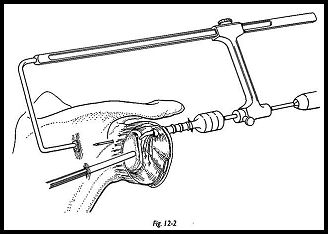 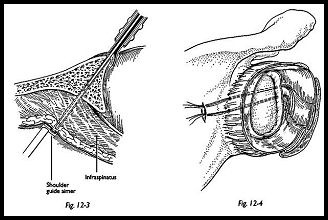 It is wise to leave the first suture pin in place through the glenoid neck while the second suture pin is drilled. This could prevent inadvertent cutting of the sutures by the second pin. It is useful to use a sandbag in the axilla as a fulcrum (as used in the hippocratic maneuver for shoulder dislocation) to open out the joint for easier access.

Postoperatively, the patient is maintained in a sling and body belt for 3 weeks, and the body belt is removed at 3 weeks. A free sling is maintained for a further 3 weeks, with pendulum exercises only during the second 3 weeks. At 6 weeks, the strengthening and mobilizing physiotherapy regimen is started. Throwing and overhead sports are restricted for 3 months and contact sports for 6 months.

Damage to the suprascapular nerve is the greatest concern because the nerve winds around the base of the acromion. Complete section of this nerve has been described using the posterior suture knot technique. The posterior knot also tethers some fibers of infraspinatus, -which may cause discomfort and puckering of the posterior wound.

The cannulated implant is shaped like a tack and is 18 mm long. The head has a diameter of 6.5 mm and the shaft is 3.2 mm in diameter. The trocar sheath -with a blunt obturator is used to insert the implant as well as a 1-mm guide wire. A cannulated 3.2-mm drill, a cannulated handpiece, a drill adaptor for a machine drive, and a cannulated driver are also used.

The beach chair position is preferred. No traction is required, but an axillary sandbag is useful for levering open the joint.

The arthroscope is passed into the shoulder via the posterior portal (Fig. 12-5). A 7-mm standard anterior portal is established. The joint is inspected, and the glenoid labrum with the adherent capsule is mobilized with a sharp rasp, so that it can be reduced onto the glenoid rim, while simultaneously tensing it in a cranial direction. 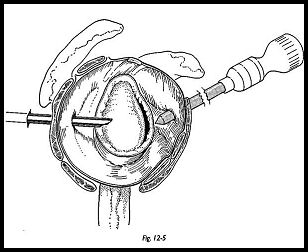 The bony glenoid rim is roughed with a power shaver down to a bleeding cancellous surface. A 1-mm guide wire is inserted into the cannulated drill until it protrudes a few millimeters beyond the end of the drill. They are then inserted into the joint together, and the previously mobilized labrum is speared with the tip of the guide wire through the cannula (Fig. 12-6).

This assembly is then reduced onto the glenoid rim and tensed in the superior direction. Sometimes it may be difficult to do it directly with the drill; the guide 'wire and a suture previously passed through the inferior glenoid ligament and used as a tension suture are often helpful to tense the anterior structures while driving the guide wire through the anterior capsule. The wire and drill are then drilled onto the far cortex. This entry point must be at least 2 mm away from the glenoid articular surface, since the articular cartilage may otherwise become distorted when driving in the tacks.

The elbow is bent at a right angle and the arm is externally rotated to 30 degrees to determine the correct position of the capsule. If the capsule is not tensed by this rotation, the inferior glenohumeral ligament should be partially incorporated in the repair. The drill is then carefully removed, leaving the guide wire in place (Fig. 12-7). A tack is advanced over the guide wire and driven in with the Suretac driver under arthroscopic control. The refixation of the labrum is then inspected with a probe, and the guide wire is removed if satisfactory. A second tack is usually inserted 1 cm from the first, and occasionally a third tack is required (Fig. 12-8). Resch and Beck2 modified this equipment for an entirely extra-articular technique, which has some advantage 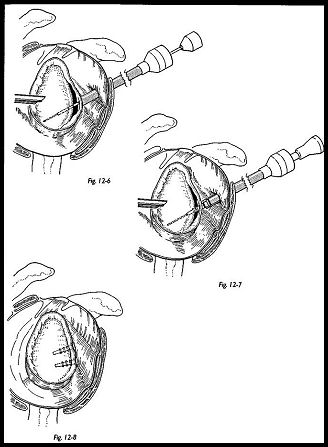 Postoperatively, the patient is maintained in a sling and body belt for 3 weeks, and the body belt is removed at 3 weeks. A free sling is maintained for a further 3 weeks, with pendulum exercises only during the second 3 weeks. At 6 weeks, the strengthening and mobilizing physiotherapy regimen is started. Throwing and overhead sports are restricted for 3 months and contact sports for 6 months.

Damage to the suprascapular nerve is the greatest concern because the nerve winds around the base of the acromion. Complete section of this nerve has been described using the posterior suture knot technique. The posterior knot also tethers some fibers of infraspinatus, which may cause discomfort and puckering of the posterior wound.