External rotation osteotomy of the proximal humerus is indicated for correction of internal rotation deformity secondary to brachial plexus lesion. These patients have lost the power of external rotation and hence have developed an internal rotation contracture. Clinically, they may not be able to get their hand to the mouth, and on flexion of the elbow, the shoulder internally rotates and the hand touches the abdomen or chest.

This procedure is also indicated for correction of internal rotation deformity that is secondary to malunion of fracture and for stabilization of anterior dislocation. Such stabilization is most usually required when part of the dislocation pathology is a large Hill-Sachs (hatchet deformity) in the posterior humeral head (Fig. 15-1). Therefore, following rotational osteotomy, the humeral head defect is shifted more posteriorly, and when externally rotated, the defect can no longer slip over the anterior lip of the glenoid (Fig. 15-2). If the operation is being done for this indication, then the subscapularis must be shortened at the same time to compensate for the relative lengthening when the humeral head is internally rotated in relation to the shaft.

Even if the dislocation is not associated with the Hill-Sachs defect, external rotation osteotomy may be used as a stabilization technique. Kronberg and Brostrom1 used a modified radiographic technique to study shoulders of normal volunteers and individuals with a recurrent instability and showed the greater degree of retrotortion in the normal compared with those with anterior instability (26 degrees). They recommend that if the angle of retrotortion is significantly reduced, then external rotation osteotomy is the corrective procedure of choice. 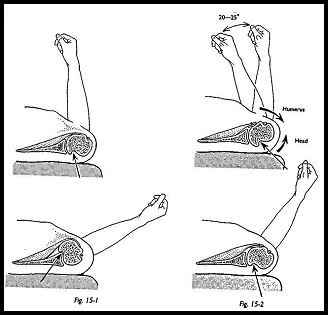 Specific preoperative investigation methods depend on the indication for surgery. If the Hill-Sachs lesion is to be demonstrated, this is most easily seen on the anteroposterior view in 60 degrees of internal rotation, but this can also be shown with the Stryker notch view and the Westpoint "axillary" view. The Stripp view is done with the patient supine and in 30 degrees of caudal tilt.2 If there is any difficulty showing the Hill-Sachs defect on plain radiographs, computed tomography (CT) scanning shows this easily.

The distal part of the deltopectoral approach is used centered on the insertion of the pec-toralis major.

The tendon of the subscapulars is exposed by retraction of the deltoid superolaterally and the conjoined coracoid muscles medially. If the surgery is being done for recurrent anterior dislocation of the shoulder, the subscapulars is divided at this stage and the joint opened. However, if this is being done for internal rotation contracture, the sub-scapularis is left intact. The tendon of the long head of the biceps is located along the anteromedial aspect of the humeral shaft, and a vertical periosteal incision is then made lateral to the tendon, and the proximal part of the humeral shaft is exposed. A six-hole AO semitubular plate is flattened with a hammer at one end, and the part between the two holes nearest the end is completely flattened (Fig. 15-3). The plate is then bent between the second and third holes nearest to the flattened end, forming an angle of 80 to 85 degrees. 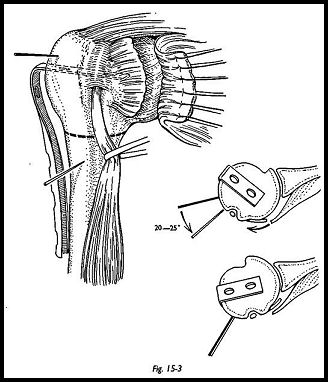 The blade portion of the plate is driven half-way into the humeral head approximately 25 degrees posterior to the frontal plane. Two guide pins are now placed, one proximal to the plate in the humeral head and the other distal to the osteotomy and angled 25 degrees anterior to the proximal pin (Fig. 15-4). After osteotomy, the fragments are rotated to bring the pins into the same vertical plane to ensure the correct amount of rotation. The osteotomy site is above the insertion of the deltoid and near the upper edge of insertion of the pectoralis major. After osteotomy, the plate is driven in the rest of the way, and the head is internally rotated on the humeral shaft by approximately 25 degrees. Cortical screws are then used to fix the plate to the distal shaft (Fig. 15-5). If the subscapularis tendon is to be shortened, then it is done so at this stage. The shortening is necessary to limit the external rotation of the humeral head to compensate for the redundancy of the anterior structure that is produced by the rotational osteotomy and hence prevent the abutment of the Hill-Sachs lesion against the anterior glenoid rim. The wound is closed in layers in the usual way with one suction drain.

A sling is used for 3 weeks, but motion is begun as soon as the patient is comfortable. Full activity and active exercise against resistance may commence after 6 weeks, depending on union of the osteotomy. 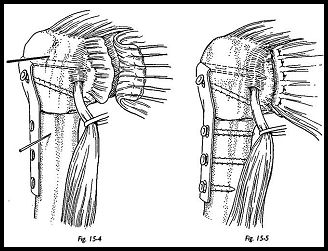