Shoulder pain that is due to pathology in the glenohumeral joint may be reheved by nondisplacement osteotomies of the neck of the scapula and the surgical neck of the humerus. Sophisticated operating theater equipment and technique are not required. The operation is of short duration, pain relief in the majority is within a day or so, and an arm sling is worn for a few days.

This procedure has been used successfully for the pain of osteoarthritis, osteonecrosis, and for both adult and juvenile rheumatoid arthritis.

Varus, valgus, and nondisplacement osteotomy in 75 percent of patients resulted in pain relief with improvement in the radiograph appearance of the subchondral bone and widening of the joint space. The mere cutting of the bone appeared to be beneficial.

From 1961, nondisplacement and displacement double osteotomy of the knee have produced a similar success rate, with the bonus that they are useful in active rheumatoid arthritis, unlike at the hip.

In 1967 double osteotomy was tried at the shoulder. Pain relief was achieved without some of the problems encountered in the lower limb, where deformity may be a major factor in these more obviously weight-bearing joints.

The indication for double osteotomy of the shoulder is pain in arising in the glenohumeral joint in osteoarthritis or rheumatoid arthritis. The pain must be prolonged, generally interfering with sleep and not reheved by nonsurgical measures. Loss of sleep from night pain that might tip the balance toward surgery is sometimes relieved by so simple a measure as rearrangement of pillows and hanging the limb out of bed (Fig. 16-1). Shoulder pain arising at sites other than the damaged glenohumeral joint should first be relieved. 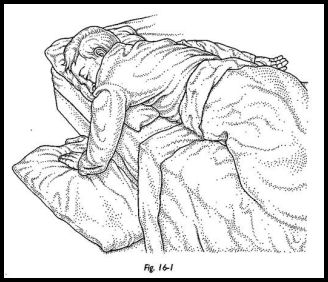 Obvious bony damage is usually present; severe damage is not a contraindication. The elevated humeral head often reassumes its normal relation with the glenoid after double osteotomy.

A careful history and examination and perhaps local anesthetic injection should confirm that the source of the pain is the glenohumeral joint. Apart from this, no special preoperative preparation or blood is required.

The position of the patient is critical and is supervised by the surgeon personally before scrubbing.

The patient is placed to the contralateral side of the table such that the ipsilateral arm lies on the table (Fig. 16-3).

It is meticulous attention to details that facilitates this operation.

Sterile towels are applied, such that the entire shoulder and the axilla, front and back, are exposed. The upper limb is toweled separately from the fingers to halfway between the elbow and the shoulder such that the upper limb can be manipulated freely during surgery.

The first assistant stands at the patient's head, the second sits or stands by the hand to control and move the arm as required.

The technique for exposing the glenohumeral joint from the front described here is based on that taught by David Trevor who had himself been taught by Bankart. The shoulder joint is accessible and apparently near the surface when approached in this way.

A general anesthetic with intubation is used. The head is toweled such that the anesthetist may keep away from the patient, and there is no interference with the field of operation. 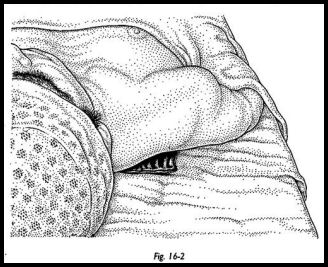 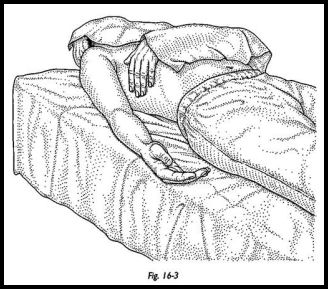 The deltoid is divided in line -with the skin incision XA inch lateral to the deltopectoral groove, thus avoiding the cephalic vein. If the shoulder is exposed through the deltopectoral groove, attempts to preserve the cephalic vein may end in its sacrifice. Denervation of the thin strip of deltoid by this incision causes no disability. The incision in the deltoid is in the line of the muscle fibers and can be undertaken bluntly. The clavipectoral fascia comes rapidly into view and the deltoid is retracted.

The lateral border of the tendon of the coracobrachialis and the short head of the biceps is defined and the clavipectoral fascia incised along this border from the coracoid process distally. The origin of the tendons of coracobrachialis and the short head of biceps is now mobilized. Trethowan spike retractors are placed on either side of the coracoid, and the tip with the tendon origin is removed with an osteotome. On wound closure, a flake of bone such as this probably reattaches more satisfactorily than the tendons alone.

Medial to and beneath these tendons is the brachial plexus and vessels. Dissection medial to their lateral border is avoided throughout. A small swab is placed beneath the tendons; a blunt retractor retracts medially the coracoid and its attached muscles, the end of the retractor being on the swab, which protects the plexus and vessels. Careful note of this swab is made by both the surgeon and the nurse to ensure its removal later. 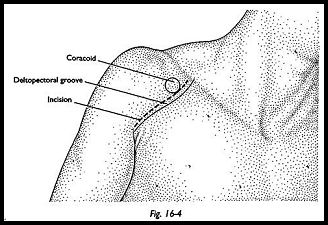 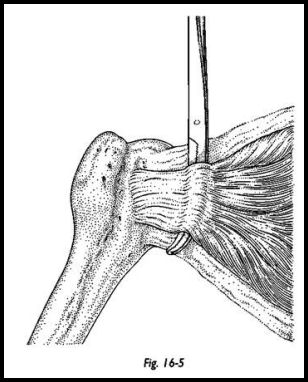 The surgical neck of the humerus is exposed just proximal to the circumflex leash. A broad osteotome is inserted at right angles to the shaft and driven across just short of the posterior cortex.

The capsule and the subscapularis are sutured individually and loosely. If there is a significant internal rotation deformity, they may be left unsutured; tight suturing limits external rotation. The tip of the coracoid is reattached by coapting the clavipectoral fascia with absorbable sutures, one on either side. The small swab is removed. The rest of the wound is closed in layers. Wound drainage is inadvisable, and vacuum drainage causes undue blood loss from exposed cancellous bone and should be avoided.

The wound is dressed, and a full arm sling is applied.

This is a simple operative procedure and generally lasts less than 30 minutes from incision to application of the sling. 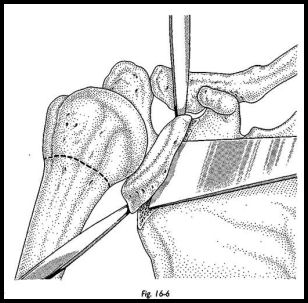 The patient is allowed up. The shoulder is mobilized as discomfort allows. Generally, arthritic pain is relieved immediately, and the sling is discarded within 10 days.

Below are seven small series assessed simply according to relief of pain.

The relief of pain is usually apparent within the first two postoperative days and is generally long-lasting. The first patient to undergo this osteotomy in 1967 for severe pain from rheumatoid arthritis remained free from pain in 1991.

The range of combined glenohumeral and scapulothoracic movement in the conscious patient is considerably increased. Significant increase in abduction is recorded in the majority of shoulders in which pain has been relieved. Pre- and postoperative rotation 'were measured in two series, Jaffe and Learmonth4 in 29 shoulders recorded an average gain of 25 degrees, and Kelly (personal communication, 1991) in 10 shoulders recorded gains of 20 degrees each of internal and external rotation, thus, on average gain of 40 degrees rotation. Variations in rotation gain may be due to operative technique; the capsule and subscapularis are better sutured loosely or left unsutured to avoid external rotation limitation.

Complications are few and not serious. In the author's series, one humeral nonunion occurred in an ankylosed shoulder. The patient was delighted with the increase in range of movement, which was at the pseudarthrosis. Jaffe and Learmonth4 had two humeral nonunions, 'which healed following internal fixation. Taylor and Haroon's2 method of partial osteotomy may avoid nonunion. Of Kelly's 11 cases, five did not have rotator cuffs; the condition of the rotator cuffs is not recorded in the other series. When the humeral head is elevated, it reassumes its correct relationship with the glenoid after successful osteotomy.

Osteotomy relieves pain and suppresses local rheumatoid activity, as is seen by the immediate postoperative regression of hot swollen synovial tissue. We do not yet know the mechanism by which this occurs. It may be the interference with large subchondral sinusoids, 'which occurs in arthritis; the division of nerves; the effect of bone healing; or some other unknown process. Double osteotomy at the shoulder is a simple inexpensive operative procedure requiring a short hospital stay. Complications are few, and the operation does not preclude a total prosthesis at a later date. In seven groups totaling 120 shoulders, 103 (86 percent) were significantly relieved of pain, and most of these had a worthwhile increase in range of movement.

Benjamin A: Double osteotomy of the shoulder. Scand J Rheumatol 3:65, 1974

Benjamin A, Helal B: Double osteotomy of the shoulder, pp. 100-5. In: Surgical Repair and