Scapular Osteotomy for Sprengel's Shoulder (Congenital Elevation of the Scapula)

Congenital elevation of the scapula is a rare congenital deformity first described by Eulenburg1 in 1863. It was Sprengel2 who recognized that the deformity was caused by failure of the scapula to descend. The high and rotated scapula causes an ugly cosmetic deformity with a widening of the base of the neck. 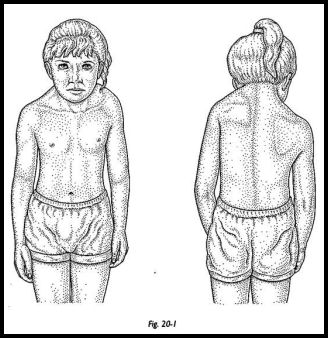 The superomedial border of the rotated scapula causes a lump at the base of the neck. Decreased abduction may also be noted. This deformity is very often associated with a scoliosis and a Klippel-Feil syndrome, which may exaggerate the deformity. The scapula is usually hypoplastic and rotated so that the inferior pole abuts the thoracic spinous processes. This is usually associated with a very straight clavicle, and an omovertebral bone is present in up to 50 percent of patients and can be palpated as a chondro-osseous bar rather than a fibrous cord in 25 percent of patients. Scapulothoracic movement is further limited by fibrous bands beneath the subscapulars associated with muscular deficiencies. Glenohumeral movement is normal, but scapular rotation is limited such that the glenoid faces down and hence limits abduction (Figs. 20-1 to 20-3).

Because the problem is essentially cosmetic, the indications for surgery are mainly cosmetic, and loss of abduction is rarely an important functional loss. The ideal time for surgery is between the ages of 3 and 8 years, although it can certainly be done after this age but with less satisfying results.

Because Sprengel's shoulder is essentially a shoulder girdle anomaly with associated congenital deformities, radiographs should be available of cervicothoracic spine to assess the scoliosis and the extent of the Klippel-Feil syndrome. The thoracic outlet should be assessed because an associated anomaly may be high deformed first rib, which in association with the straight clavicle can easily cause compression of the brachial plexus or subclavian vein after relocation of the scapula. 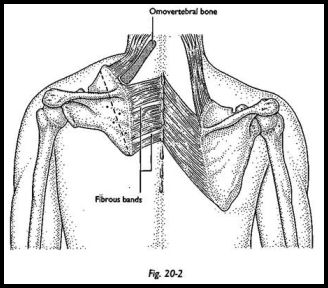 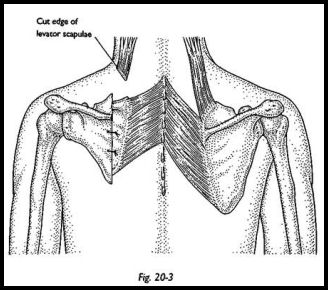 With the patient lying supine on the operating table, a 2-cm transverse incision is made over the anterior aspect of the middle third of the clavicle (Figs. 20-4 and 20-5). 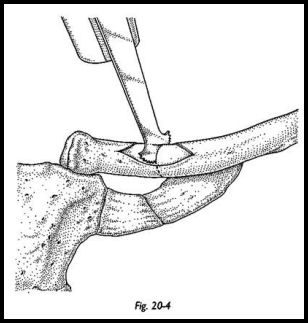 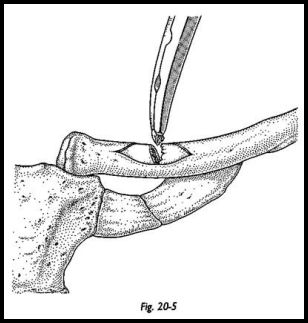 The clavicle is exposed subperiosteally and an oblique osteotomy made.

The ends of the bone are then morceUized with bone nibblers, and the bone is left in situ (Fig. 20-6). The periosteal sleeve is then closed, and the -wound is sutured (Fig. 20-7). 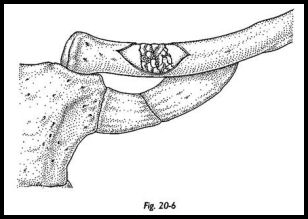 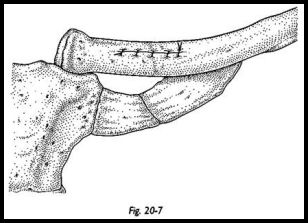 The patient is placed in a semiprone position on the operating table with the affected side uppermost. The arm is draped separately to allow for manipulation during the procedure (Fig. 20-8). 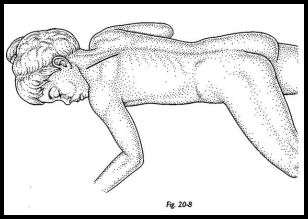 A vertical incision is made over the medial border of the scapula.

The approach is deepened to expose the medial border of the scapula, and the periosteum is incised at the origin of the supraspinatus and infraspinatus. These muscles swept laterally with a rougine for 2 cm (Fig. 20-9). An osteotomy is made 1 cm from the vertebral border with an oscillating saw (Fig. 20-10). The line of the osteotomy passes the base of the spine and extends through the supraspinous fossa. It will be found at this stage that the lateral portion of the scapula will be very much more mobile than the thin medial strip that is left with its associated tethers. 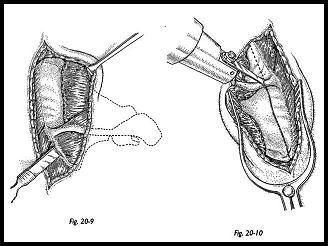 The upper one third of the medial strip is now removed along with its fibrous bands and any omovertebral bone that may be present (Fig. 20-11). If any obvious taut fibrous bands remain on the inferior strip of medial scapula, these are also divided. The lateral part of the scapula is now protracted and pushed away from the chest wall, and a finger is passed between subscapularis and the underlying ribs. Any adhesions or fibrous bands are divided to allow complete mobility of the blade of the scapula (Fig. 20-12). 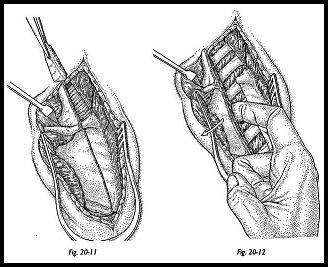 The lateral portion is now rotated downward and stabilized with sutures passing through the periosteum and bone to the remaining medial strip (Figs. 20-13 and 20-14). No attempt is made to bring the inferior angle of the major portion of the scapula down to the level of the normal side, because the blade is smaller and this increases the risk of overcorrection, placing possible compression on the brachial plexus. The aim is to balance the spines of the scapula and level the shoulders for cosmetic benefit. The wound is closed, and the arm is placed in a supporting sling.

On the first postoperative day, gentle passive mobilizing is started as pain allows. Sutures are removed at 10 days. Active physiotherapy is started when soft tissue healing is achieved, but the sling is retained for approximately 6 weeks, when full active movements are allowed.

The main complication is the risk of thoracic outlet compression because of associated clavicle and 1st rib anomalies. It was originally thought that the neurologic complications arising from this procedure were caused by traction on the brachial plexus. Robinson et al.,3 however, point out that scapular rotation in the presence of clavicle and first rib anomalies can cause direct mechanical thoracic outlet obstruction, and hence, these workers advise clavicular osteotomy and morcellization. These techniques therefore are strongly recommended to obviate this serious complication.

The success of the operation must be measured in cosmetic terms. Therefore, realistic expectations must be explained to the patient if a major part of the cosmetic deformity is either the Klippel-Feil syndrome or the associated scoliosis, because no amount of scapular rotation will improve these aspects.

Patients and parents alike are almost universally pleased with the improvement following surgery as long as adequate preoperative explanation has been given concerning realistic improvement.4

Removal of the omovertebral bone is best accomplished extraperiosteally. The bone-biting rongeur can be used to remove the bone from the scapular angle and from its connection to the cervical spine. If this step is done subperiosteally, then this bone can recur. The spinal accessory nerve on the undersurface of the trapezius and along the vertebral border of the scapula must be protected at this stage. 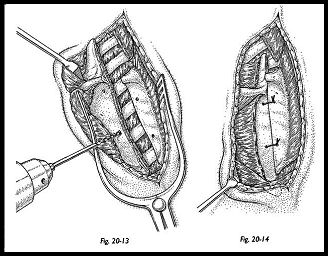 In the majority of procedures described, scapular transplantation is attempted by division and lengthening of soft tissue structures sometimes is associated with transposition of muscular origin, such as the Woodward procedure,5 but this involves a greater risk of damaging the motor nerves. When pure transplantation is attempted with subperiosteal resection of the superior part of the scapula, recurrence of the deformity is high. Pure extraperiosteal release involves widespread soft tissue dissection, which can produce widespread hemorrhage and scar contractures. More conservative approaches restricted to the excision of the superomedial portion of the scapula tend not to give the improvement in abduction of the shoulder. Osteotomy as described is a simpler procedure, reducing the risk of nerve damage and producing excellent cosmetic and functional results.

5. Woodward JW: Congenital elevation of the scapula. Correction by release and transplantation of muscle origins. J Bone Joint Surg [Am] 43:219-28, 1961