Winging of the scapula is usually due to dysfunction of the long thoracic nerve with a resultant anterior serratus muscle palsy. This can be caused by a single traumatic episode, repetitive trauma, neuralgic amyotrophy, poliomyelitis, and the muscular dystrophies, particularly facioscapulohumeral dystrophy.

Thoracoscapular fusion is indicated when deltoid and the other glenohumeral motor units are intact but the scapula-stabilizing muscles are permanently nonfunctioning. This situation most commonly arises in facioscapulohumeral dystrophy. In this peculiar dystrophy, the deltoid muscle is nearly always spared or only partially involved. Without its stable origin, the deltoid loses its mechanical advantage, and in attempted abduction, the scapula rotates, and active sustained abduction and flexion is severely limited (Fig. 21-1). If the scapula can be stabilized, then the deltoid can exert a powerful action on the humerus.

Several methods of achieving stability of the scapula have been described. Putti1 described an interscapular fixation that apparently caused compression of the vessels under the clavicle. Rinaldi2 fixed the scapula to the thorax using a fascial band taken from the fascia lata and passed around the spinous processes of the second to sixth thoracic vertebra and then through a hole in the spine of the scapula. This was a modification of the technique used by Whitman3 and Dewar and Harris.4 They considered it necessary to retain some thoracoscapular movement. Although the initial results are satisfactory, the fascial slings tend to stretch, and the function deteriorates. Permanent fusion of the scapula to the chest wall can be achieved using corticocancellous grafts and screws.5

Thoracoscapular fusion is indicated for loss of power. Winging of the scapula is usually a painless condition, but it may be accompanied by fatigue or ache when attempting prolonged abduction or flexion. No sustained activity can be undertaken above shoulder height in front of the patient, and the arm just drops loosely by the side.

Cosmesis is another indication. Gross winging of the scapula can be an extremely ugly deformity, and female patients particularly may rate this as the main indication for surgery. Shoulder straps and clothes tend to slip off the shoulder down the arm.

Thoracoscapular fusion is also indicated for loss of balance. In a progressive muscular dystrophy, particularly, the onset may be asymmetric, such that the first shoulder may start to wing several years before the other. The patient may well feel unbalanced until scapular stability is restored. 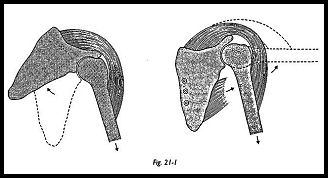 Because thoracoscapular fusion is a major undertaking for the patient, who must remain in a shoulder cast for 3 months, the symptoms arising from the scapula instability must be sufficient to warrant this major intervention. Whether fixation of the scapula'will benefit the patient can be quite easily assessed by clinical test. First, the patient is asked to raise both arms forward and maintain this position with the arm horizontal until fatigue causes it to drop to the side. The test is then repeated with the scapula manually held downward to the chest wall to prevent winging. If maintenance of flexion or abduction is then found to be very much easier, and the fatigue test is greatly prolonged, then thoracoscapular fusion may be indicated.

The patient lies prone on the operating table with the arm hanging over the side of the table (Fig. 21-2). This almost always brings the scapula into the ideal position for fixation to the ribs with the vertebral border lying parallel and 5 to 7 cm lateral to the spinous processes. 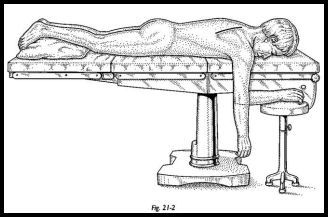 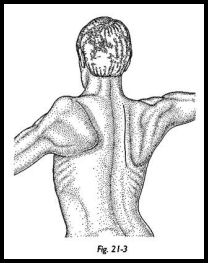 Three ribs lying under the most convenient part of the scapula are chosen; these are usually the -4th, 5th, and 6th ribs. The periosteum is incised in the line of the rib, and the periosteum and parietal pleura are separated on the deep surface of the rib so that a retractor can be put under the rib to prevent damage to the pleura. The superficial surface of the rib is then "petalled" with an osteotome and partly decorticated. The scapula is then placed in the correct position over the denuded rib, the scapula is drilled, and the underlying rib is drilled with a protective retractor in place to prevent the drill damaging the pleura (Figs. 21-4 and 21-5). The rib is then tapped, measured for depth of screw, and the first screw is loosely tightened. The second and third screws are then inserted in a likewise manner. It is best to drill the second two holes with the first screw in place so that the scapula is fixed during this procedure and the first drill hole is not lost. 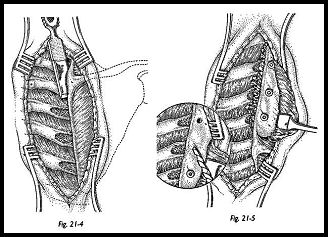 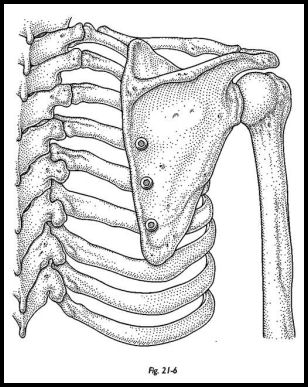 The wound is closed with drainage, and the patient is carefully turned over with an assistant holding the arm. A shoulder spica is apphed with the arm at 50 degrees of abduction and 30 degrees of forward flexion, with the hand in front of the mouth. Alternatively, an adjustable brace may be used. The patient is nursed after surgery in a sitting position (Figs. 21-7 and 21-8).

Three months after surgery, the arm section of the spica is bivalved so that the upper section may be removed and the patient can start active abduction. Once control of abduction has been regained, the rest of the cast is removed. A triangular pillow may be placed under the arm to allow gradual adduction of the arm over a period of 1 week. Physiotherapy is then helpful to regain full glenohumeral movements and so strengthen the deltoid muscle.

Pneumothorax that is due to perforation of pleura by a screw may be a compHcation of thoracoscapular fusion. Hence a postoperative chest radiograph is mandatory.

A rib stress fracture is another possible complication. When the shoulder spica is removed and normal range of movement is regained in the arm, the bone graft around the screws gradually hypertrophies. During this period, however, a stress fracture can occur. Sudden chest pain within the first few weeks of removing the shoulder spica should alert one to the possibility of this complication. Simple rest in a sling alone, having confirmed the diagnosis by radiography, is all that is required.

Hemothorax may also result. Damage to the intercostal vessels can be avoided by elevating the periosteum over the superior border of the rib only to place the retractor to protect the pleura.

The disease may progress. When operating on any patient with a progressive muscular dystrophy, it is always a good surgical principle to immobilize the patient for the minimal possible time. The wearing of a shoulder spica for 3 months causes a significant degree of immobility and, hence, can result in a temporary setback in the disease. The patient may generally feel rather weak for several months after removal of a shoulder spica. 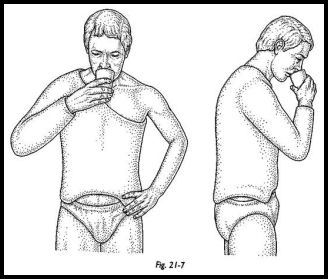 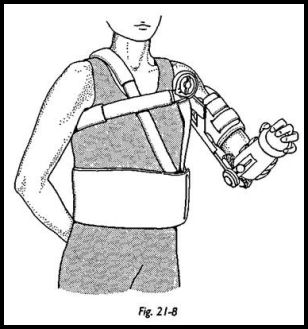 Review of patients who have had this procedure for facioscapulohumeral dystrophy demonstrated that the power of the deltoid muscle did not diminish over the years and in fact became stronger. All patients experienced an ache in deltoid for several months after the operation, but this gradually disappeared. All patients were independent before operation and could do most things, but great effort was required in any movements involving the shoulder girdle. The operation allowed them to do sustained maneuvers involving the shoulder, and simple tasks such as getting dressed and cooking were achieved without pauses for rest, which was not possible before operation.

Five of six patients returned for further scapular fusion on the remaining shoulder. This fact alone speaks for the success of the operation to the patient.

Lung function studies on some of the early patients in the series showed only minimal loss of vital capacity. None of the patients at review had any related functional problem, because they were limited by peripheral muscle weakness rather than by any diminution in respiratory reserve.

It is interesting to note the range of movement that can be achieved, all of which obviously takes place at the glenohumeral joint alone, is remarkably consistent. The average range of movement was abduction, 100 degrees; flexion, 90 degrees; extension, 35 degrees; external rotation, 20 degrees; and internal rotation, 90 degrees. The ability to sustain abduction or flexion was to the patient the greatest improvement. Fascioscapulohumeral dystrophy is a rare disease, and hence, the operation is seldom required. Its results, however, are very successful, fully justifying the major surgery involved.

4. Dewar FP, Harris RI: Restoration of function of the shoulder following paralysis of the trapezius by fascial sling fixation and transplantation of the levator scapulae. Ann Surg 132:1111-15, 1950