Introduction:
Frozen shoulder is an extremely disabling condition, presenting with and remitting shoulder pain and stiffness.  This was well defined by Codman in 1934, who described the first and best classical diagnostic criteria still used to this day.

The classification of a primary idiopathic frozen shoulder may be primary or idiopathic.  This is a distinct pathological condition identified by global limitation of glenohumeral motion, with a loss of compliance of the shoulder capsule, with no specific underlying cause found.

A secondary stiff shoulder or secondary frozen shoulder, typically presents after injury or surgery.  It may also follow an accompanying condition, such as subacromial impingement or a rotator cuff tear.

Diagnosis:
The diagnosis of a primary Idiopathic frozen shoulder is made on the basis of:

Natural History:
The natural history of a frozen shoulder has typically been described as passing through 3 stages.  These stages last for approximately 2 years.

Aetiology:
The frozen shoulder has been found to be more common in association with the following conditions:
Pathology:
The macroscopic appearance is that of thickening of the anterior capsule, particularly the coracohumeral ligament (CHL) and middle glenohumeral ligament MGHL).
Contracture of the capsular ligament restricts specific movements of the glenohumeral joint. These are: 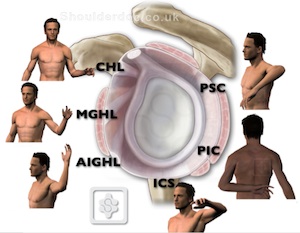 Arthrogram of a normal shoulder (left) and a frozen shoulder (right) - note the reduced capsular volume: 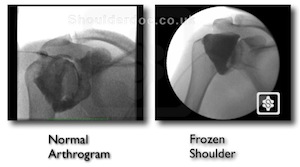 Microscopically there are 4 stages:

Treatments:
The natural history of frozen shoulder is not necessarily that of complete resolution.  The original quotation that most recover from frozen shoulder originates from Codman in 1934.  However, he stated that most frozen shoulders recover compared to tuberculosis.  Many studies have shown frozen shoulder not to be an entirely self limiting condition and most patients still have some restriction of shoulder movement on resolution of the frozen shoulder but no functional disability (Grey JBJSA 1962, Shaffer JBJSA 1992, Bunker JBJSB 1995, Miller Orthopaedics 1996).

Surgery:
Early surgery has been shown to be of significant benefit for a faster recovery of pain, quicker recovery of function and earlier return to work (Hill Orthopaedics 1988, Doddonhoff  JSES 2000).  Arthroscopic capsular release has been shown to avoid the complications of manipulation under anaesthetic.  It has the advantage of being able to identify any other associated pathologies.  Numerous studies have demonstrated the benefit of capsular release, although no study that we are aware of randomises patients directly comparing MUA to arthroscopic release.  Our own study of 48 patients undergoing capsular release followed for 18 months, demonstrated significant improvement by 5 months postoperatively for resistant frozen shoulders.  The Constant score improved from 14 preoperatively to 66 postoperatively, with 80% satisfaction.  Range of movement improved significantly by 5 months (Boutros, Snow and Funk 2006).

Treatment Algorhythm.
Treatment algorhythm is based on the ability of patients to cope and the significance to cope with the pain and stiffness during the stages of frozen shoulder.  This is summarised below: 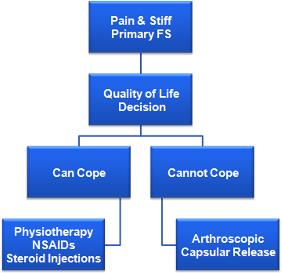 Conclusion:
Primary idiopathic frozen shoulder is an extremely disabling condition, which does pass through a typical 3 stage progression.  However, full recovery at the conclusion of the 3 phases is not common.  Early surgical intervention has significant benefits for those patients that are unable to cope with non-operative treatment.