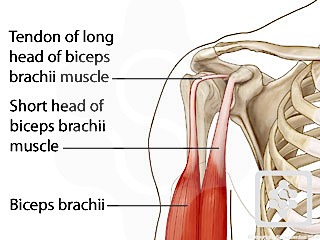 The proximal biceps comprises the short head of biceps and the long head of biceps.  The short head of has a muscular and aponeurotic origin from the coracoid.  Ruptures of the short head of biceps are incredibly rare and unusual.  However, the long head of biceps (LHB) which arises from the superior labrum at the supraglenoid tubercle has a long tendinous portion which traverses a substantive route within the shoulder and then extra-articular before joining the musculo-tendinous junction at the level of the humeral neck.  The formation of the LHB in taking this tenuous course is an evolutionary phenomenon as humans have evolved from walking on all fours to an upright stance, using their shoulders for manipulation and overhead tasks as opposed to ambulation.
As the LHB traverses from intra-articular to extra-articular it is contained within the biceps groove between the lesser and greater tuberosities by the biceps pulley (deep) and by the transverse ligament (superficial).
The biceps pulley is a key stabiliser to the biceps and is made up by the superior glenohumeral ligament and coracohumeral ligament, both being intricately associated the subscapularis tendon and the supraspinatus tendon.  The biceps pulley can be easily appreciated and visualised arthroscopically, as well as during open dissection. 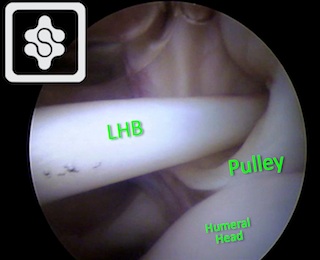 
FUNCTION OF THE LONG HEAD OF BICEPS

LHB PATHOLOGIES
Conditions affecting the long head of biceps are:

Proximal biceps pain is mainly felt by the patient with any lifting activities, overhead sports activities - those activities particularly relating to lifting in the frontal plane with the elbow flexed, such as putting a box on one shoulder or also playing overhead sports such as tennis.  The pain is well localised and very specific to the anterior aspect of the shoulder, in line with the long head of biceps tendon.

The clinical features are:

A LHB rupture is denoted by a typical 'popeye sign' with a dropped biceps muscle.  The retracted muscle may be fixed or mobile.  In my experience patients with a mobile (unfixed) ruptured biceps tend to suffer with discomfort, cramping and aching from the biceps muscle with activities. 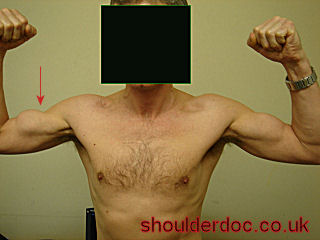 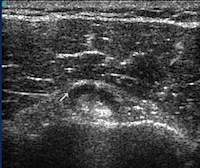 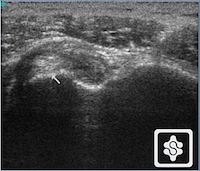 Pulley tear at arthroscopy in an overhead athlete

1.    Physiotherapy:
Functional biceps tendonitis can occur with glenohumeral instability, as well as scapula disorders. Instability and protraction of the shoulders leads to tension on the long head of biceps tendon.  This can be addressed by postural correction and a scapula setting and stabilising regime.

2.    Injections:
Injections into the biceps tendon sheath are beneficial to reduce inflammation and swelling of the biceps sheath.  However it is essentially that these be performed under ultrasound guidance and my personal preference is towards Hyaluronan injections rather than corticosteroids due to the proteolytic natures of steroids and risk of rupture with corticosteroids.