This procedure was first described by Eden in 1924 and Lange in 1959. It attempts to restore the three anatomical and functional aspects of the trapezius muscle which has suffered paralysis from an injury to the spinal accessory or long thoracic nerve. Palsies of the trapezius muscle can lead to destabilization of the scapula with medial and lateral scapular winging, respectively.
The Eden-Lange procedure involves the lateral transfer of the levator scapulae, rhomboid major, and rhomboid minor to substitute for each part of the trapezius. This lateral transfer of the muscular insertions improves their mechanical advantage to reproduce the functions of the trapezius and support the scapula. The levator scapulae substitues for the superior portion of the trapezius, the rhomboid minor for the middle, and the rhomboid major for the inferior portion. 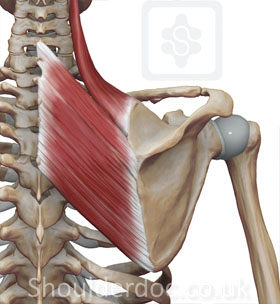 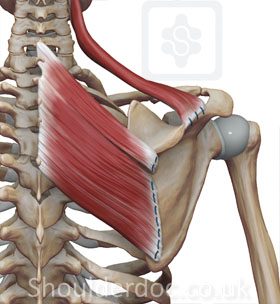 The modified Eden-Lange procedure involves transferring the insertion of the rhomboid minor to the supraspinatus fossa. It is believed that this positional change more closely approximated the function of the middle part of the trapezius and better stabilizes the superior angle of the scapula.