Disorders such as facioscapulohumeral dystrophy (FSHD), neuralgic amoyotrophy, long thoracic nerve palsy, spinal accessory nerve palsy and dorsal scapular nerve palsy, which affect the muscles that attach to the scapula that coordinate scapulothoracic motion can result in winging of the scapula and subsequent scapular dyskinesis.

The images below document surgery for scapula fixation The patient is placed prone on a Wilson spine table. The arm on the operative side is placed in approximately 90 degrees of abduction and external rotation. Bony landmarks, such as the superior, medial and inferior borders of the scapula, the scapular spine and the spinous processes of the seventh cervical and first four thoracic vertebrae along with their associated ribs are identified and marked with pen. The spine of the scapula should overlie the fourth rib. An incision is made along the medial border of the scapula through the skin and subcutaneous tissue. The dorsal surface of the trapezius muscles that overlies the scapula is exposed. An incision is made through the raphe between the rhomboids and serratus posterior to expose the subscapularis bursa. Using the seventh cervical spinous process as a landmark, the third, fourth, fifth and sixth ribs are exposed. 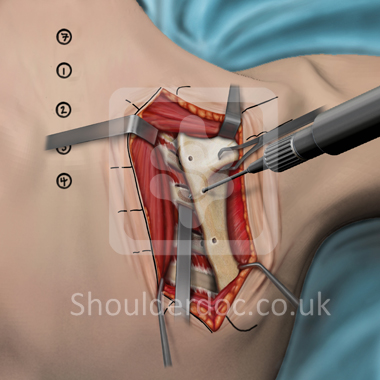 Careful subperiosteal dissection of the ribs is performed to separate the ribs inferiorly and superiorly from the intercostal muscles and ventrally from the parietal pleura of the lungs. The exposed ribs and ventral surface of the scapula are lightly decorticated with a high speed burr. A malleable retractor is passed carefully under the ribs to protect the lungs when a burr is used to place holes in the scapula and ribs. A single hole is placed in the supraspinatus fossa directly over the third rib. Two drill holes each are placed through the exposed scapular body over the fourth and fifth ribs. Bone graft is obtained from the posterior superior iliac spine of the pelvis and is placed between the third, fourth, and fifth ribs under the exposed medial scapula. 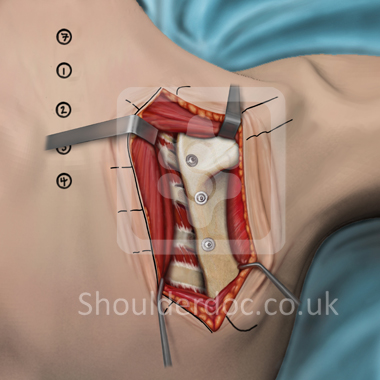 Alternatives include just screws instead of the plate and screw method 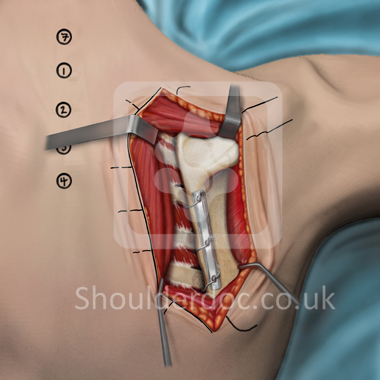 Or the plate and wire method.

Once the scapula is fixed to the underlying ribs, the elevated supraspinatus and infraspinatus are allowed to fall back to their original positions, providing soft tissue coverage over the hardware. The rotator cuff musculature and scapular stabilizers are then re-approximated to the medial border of the scapula. The wound is then closed in layers and a dressing applied. The arm is finally placed in a sling.