Many surgeons perform ASD with powered shaver systems alone. However, the soft tissue covering under the acromion (the insertion of the coracoacromial ligament) is very resistant to a powered resector, and virtually immune to a burr, as it is firm and rubbery. This means that electrosurgical apparatus is really necessary and cuts surgical time considerably. 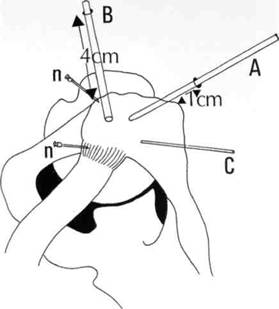 Figure 8.6 Needles are inserted to mark the edges of the coracoacromial ligament.

The soft tissue must now be removed from the undersurface of the acromion, and this means that the coracoacromial ligament must be divided. Ogilvie Harris (personal communi­cation, 1988) has examined the blood supply of the coracoacromial ligament in cadavers. He has shown that the largest vessels are at the coracoid end. At the midway point there are usually three vessels in the ligament, but only 1 in 20 had a blood vessel within 1 cm of the insertion of the ligament. The entry point for the instruments is 3-4 cm from the acromion, in direct line with the two pins (Figure 8.7). The coracoacromial ligament is divided from the medial marker pin to the lateral marker pin, using the electrosurgical apparatus (Figure 8.3). For the electrosurgical apparatus to func­tion, the saline must be flushed out of the bursa and sterile distilled water for irrigation must be instilled.

Figure 8.7 The entry point for the instruments is 3-4 cm from the acromion in direct line with the two pins.

Once the coracoacromial ligament has been divided, the area of resection should be cir­cumscribed, using the electrosurgical appar­atus (Figure 8.9). The tissue within this circle is then morsellized with the cutting diathermy so that it hangs down in strips.

Figure 8.8 The coracoacromial ligament is divided with the electrosurgical apparatus.

Figure 8.9 The area for resection is circumscribed by the electrosurgical apparatus.

The electrosurgical apparatus is now exchanged for the powered full radius resector and all the morsellized tissue resected so that the undersurface of the bone can be seen (Figure 8.10). The full radius resector is now exchanged for an acromionizer burr and the acromioplasty started. Ellman recommends that the burring starts from the anteromedial corner of the acromion, with a deepening hole 3 mm deep which is then extended as a trough from front to back for a distance of 2.5 cm.

Figure 8.10 The full radius resector is used to remove the soft tissue under the acromion.

Figure 8.11 The acromionizer burr is then used to resect the undersurface of the acromion.

Further troughs are now made across the width of the acromion (Figure 8.11). Finally the whole area is polished by circular passes of the burr and the process repeated until the required depth is achieved.

Osteophyte under the acromioclavicular joint should be resected and this requires removal of the inferior capsule before the bone can be burred away.

As in any surgical procedure, the key is visualization, and this is the problem with ASD. Firstly, the surgeon is working in a restricted space and, secondly, the tissues tend to bleed.

Thirdly, the soft tissue does not peel away cleanly and the surgeon finds himself perform­ing an arthroscopic procedure amongst dense seaweed in extremely murky water. Access can be improved by traction of the limb in a caudad manner with a shoulder holder, but the arm must be kept at the side and not abducted as this restricts vision. High pressure irrigation must be used. This does not necessarily mean an infusion pump, although many surgeons find this helps, but there must be adequate flow, under adequate pressure, which means a high head of pressure, a high drip stand and wide-bore inflow tubing. As already stated, an elec-trosurgical apparatus cuts down bleeding and operation time considerably.

The shoulder swells to an alarming extent following this procedure but this tends to reduce within hours. A sling should not be worn. The patient should perform pendulum exercises every morning and every evening for 1 minute. Strenuous overhead activities, such as tennis and throwing, should be avoided for at least 4-6 weeks. At 6 weeks, strengthening exercises are begun.

Ellman described his 2-5 year results at the American Academy of Orthopaedic Surgeons' meeting in 1989.[7] He started ASD in 1985 and performed 10 cases in that year. By 1987 he had performed 50 cases and by 1989 217 cases. He reported on the 87 cases with a follow-up of 2-5 years. Of these, 79 per cent had stage 2 impingement and 21 per cent had stage 3 - that is, a full thickness cuff tear. The average follow-up was 34 months and the average age 49 years. The patients had received on average four steroid injections prior to surgery and nearly all had experienced night pain. The patients were assessed using UCLA scores and 85 per cent were satisfac­tory, 76 per cent returning to sport. Of the patients with stage 2 impingement, 89 per cent were satisfactory, but those with cuff tears had worse results, only 65 per cent being satisfac­tory. The group with cuff tears had an average age of 74 years and Ellman believes that open treatment is preferable to ASD if a cuff tear is present.

Warren et al11 presented results in 40 patients undergoing ASD and debridement of the acromioclavicular joint under scalene block, performed between 1984 and 1986. Of these, 20 had stage 2 impingement and 10 stage 3. The average age was 43 years. All had a glenohumeral arthroscopy and 31 abnormali­ties were found, 11 had labral pathology, 10 had full thickness tears, three had partial thickness tears and seven had tendinitis of the long head of the biceps. Overall, 80 per cent were excellent or good as rated by the Hospital for Special Surgery (HSS) scoring system, 14 per cent were fair and 16 per cent poor. The average time to recovery was 3.8 months, most were in work at 10 days and 77 per cent returned to their premorbidity sporting level. Five of the six who failed to return to sport had anteroinferior labral tears (Bankart lesions). Warren stresses that impingement secondary to instability should not be treated by ASD and that patients with moderate size tears should have these repaired at open surgery.