Condensing osteitis of the clavicle was first described as a disease entity in 1974. There is pain And often localised swelling of the medial third of the clavicle, with increased radio-density. The sternoclavicular joint is typically never involved.  It is also known as aseptic enlarging osteosclerosis of the medial end of clavicle.

The cause is not really known. The syndrome has been considered to be a response to mechanical stress. Infection has also been thought to be the cause, particularly in children (Jones et al. 1990), but this may be a separate entity. Condensing osteitis of the clavicle does bear a resemblance to condensing osteitis of the pubis and ilium, although no definite association has been reported.

It is a rare condition, most commonly seen in females of late childbearing age. By the time patients are diagnosed the condition and symptoms will have been present for months or years. The pain is described as intermittent or steady, but at times may be intense. Pain is usually localised to the medial end of the clavicle, but may radiate to the shoulder, neck and anterior chest wall. Movement of the shoulder is seldom restricted, but extreme flexion and abduction may aggravate the pain. A swelling over the medial clavicle is often present, with no overlying skin changes. Skin inflammation usually denotes an infection. Tenderness is mild. Bilateral involvement has not been reported.

Investigations should include a FBC, ESR, x-rays, MRI scan, Mantoux test and blood serology to exclude infection. Biopsy is mandatory to obtain material for histology and bacteriological culture.

Intermediate term follow up has shown that most of the pain settles over about six months, but the swelling and radiological changes persist (Sng et al 2004). No data exists for long term results. 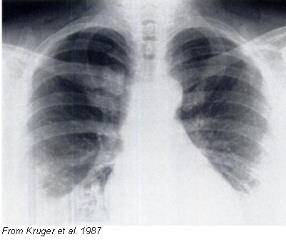 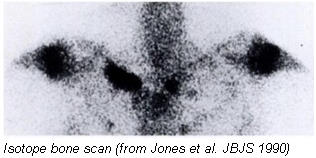 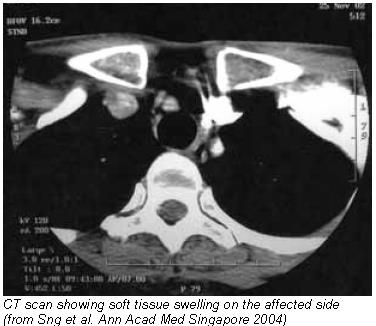 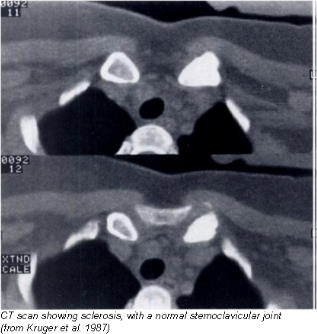 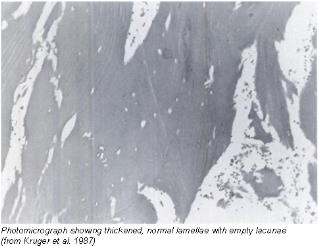 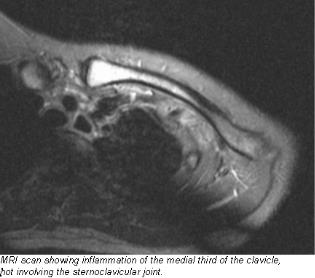