There are four phases involved in throwing. They are:

It is during cocking that internal impingement can occur.
The action of cocking can be summarised in three descriptive movements that all occur at the shoulder. 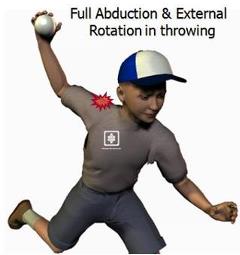 This diagram shows how all of the components of the shoulder come together during throwing, with the red star indicating the point at which the rotator cuff tendon is being impinged.

The combination of abduction and external rotation in the cocking phase of throwing causes an impingement of the underside of the rotator cuff against the posterior (back) superior (top) labrum. 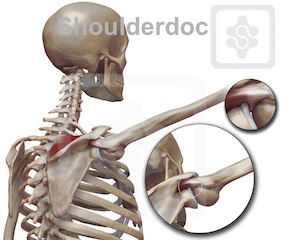 Image showing how the rotator cuff gets 'pinched' (impinged) between the glenoid labrum and the humeral head in full abduction and external rotation.

This is something which occurs to everyone during throwing. Therefore internal impingement in itself is not an injury. It becomes an injury when over time, microtrauma from repetitive throwing results in damage to the rotator cuff (see rotator cuff tears) or the superior portion of the labrum (see SLAP tears). 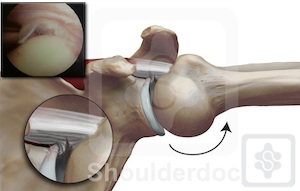 The 'impingement' lesions on the labrum and rotator cuff are known as 'kissing lesions'. The image below shows a view of the lesions at arthroscopy (viewing from anterior): 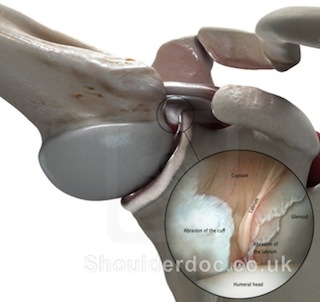 The main symptom patients with internal impingement usually complain of is pain. This is usually made worse by over-head activity or throwing. The pain is a result of inflammation and irritation to the tendons which are being impinged. This is called a tendonitis. Also affected is the bursa. This is a fat pad within the shoulder to allow tendons and muscles to glide over bones easily. If this becomes inflamed and irritated it is called bursitis. There may also be shoulder instability as a result of the damage done to the labrum. The damage done to the rotator cuff may cause a weakness in the movements of the shoulder, particularly abduction and external rotation, the movements discussed above as being crucial to throwing.

Internal impingement is usually diagnosed on clinical examination.
Special tests such as a MR arthrogram may be useful. This is a specific type of MRI scan in which a dye is injected into the joint space to allow tears in the labrum to be seen. Fluid around tendons and in the joint could also point to impingement. It may also show up tears in the rotator cuff. Similar things may also be picked up on an ultrasound scan 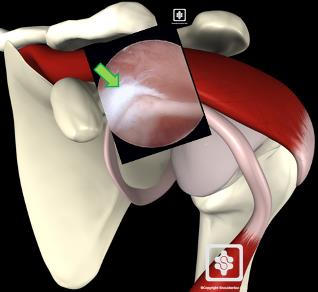 Treatment can be divided into five phases: