Posterior instability of the shoulder lennard funk from Lennard Funk

Hippocrates first described reduction for posterior dislocation of the shoulder. He described taking the forearm behind the back into internal rotation, flexing the elbow and pushing in the shoulder from behind.Sir Astley Cooper was the first to describe a posterior dislocation in a patient with a seizure and Malgaigne was the first to describe a series of 37 patients with Posterior Instability in 1855 – before the advent of radiology.

During the 20th century the results of surgical treatment of posterior shoulder instability have been as varied as the techniques designed to correct it. In 1984 Hawkins et al. reported a 50% failure rate after a variety of different posterior stabilization procedures for recurrent instability of the shoulder. Tibone and Ting reported failure in 40% of athletes treated with staple capsulorrhaphy. Until recently the pathomechanics and role of surgery for pure posterior instability have been poorly understood.

It is simplest to divide posterior instability into Traumatic and Atraumatic origins. Traumatic instability typically follows a distinct history of dislocation or subluxation, sustained during a significant injury.

Patients with atraumatic instability often have no history of true dislocations, but on probing there often is a history of minor trauma or repetitive microtrauma (sports). This is usually associated with capsular laxity and/or muscle patterning abnormalities.

We use the Stanmore classification to describe and guide our management of patients with instability. It takes into account the marked overlap between traumatic and atraumatic dislocators and also the fact that these do change over time. For more details read: Lewis, Kitamura & Bayley in Current Orthopaedics. 18:97-108. 2004.

The posterior restraints to posterior translation of the humeral head are:

1. Glenoid: version and shape. Abnormalities in the glenoid shape and version has been described as more common in patients with atraumatic posterior instability. (Weishaupt,2000). The greater the retroversion of the glenoid the more prone it is to posterior dislocation. Generally with a retroversion of greater then 20 degrees one should consider a glenoid osteotomy. However, even with CT it is difficult to accurately measure glenoid version, as with rotation fo the scapula the axial plane varies and thus the measured version from these cuts (Bokor, 1999)

2. Capsule: IGHL plays a significant role at the extremes of internal humeral rotation. Unlike the anterior structures, the posterior capsule is relatively thin with less clearly defined ligamentous components, especially superiorly above the equator. Although O'Brien et al. have described a posterior thickening or band of the IGHLC, other investigators have found its presence to be inconsistent. This may in part reflect variation in sampling depending on glenohumeral positioning. This region has, however, been shown to be the primary capsuloligamentous restraint to posterior translation at higher degrees of elevation and internal rotation. Transection studies have also demonstrated that if, in isolation, the posterior capsule was completely incised, the glenohumeral joint did not dislocate posteriorly (Harryman, 1992). For dislocation to occur in the flexed, adducted, and internally rotated shoulder, in addition to the posterior capsule, the rotator cuff interval had to be incised as well. The posterior capsule may be torn in the midcapsule or at it’s humeral attachment = Reverse Humeral Avulsion Glenohumeral Ligament (RHAGL).

4. Labrum: Usually torn in Traumatic dislocations, with the formation of a posterior Bankart lesion. The importance of the posterior labrum in posterior instability has been neglected in the past. Since the advent of arthroscopy posterior labral lesions have been more commonly found and treated. Antoniou & Harryman (2001) have described the significance of reconstructing the glenolabral depth with a capsulolabral repair in establishing structural stability (). Recent posterior labral lesions described: POPSLA lesion – Posterior Periosteal Sleeve Labral Avulsion (Yu et al. Skel Radiol. 2002. 31:396-9) Kim’s Lesion – Incomplete & concealed avulsion posteroinferior labrum (Kim, 2001).

Post dislocation is much less common than anterior and may often be missed, as mentioned above. Athletes, such as eight lifters, throwers, racket sport athletes, rugby players, and swimmers at higher risk. Many of these athletes have inherently lax shoulders, which is an advantage for their sports, but also makes them prone to instability. They receive repetitive trauma to their shoulders which can lead to chronic instability.

These patients often don’t present with a typical history of true dislocations, but rather symptoms of posterior joint pain and/or clicking. The exact positions of the shoulder causing the pain and/or click should be described. Often this the pain occurs when loading the flexed and internally rotated shoulder. This can be confused with subacromial impingement; therefore careful clinical examination is essential.

The clinical examination is the most important part of the diagnostic process. It is beyond the scope of this presentation to discuss the detailed examination, but it should include all of the following:

This is ideally done by a multidisciplinary team, comprising the surgeon, physiotherapist and occupational therapist.

The table below shows a review of some of the clinical tests for posterior instability: 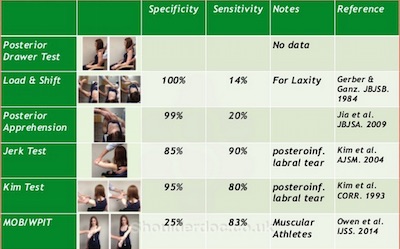 Usually include radiographs (AP and axillary views) and MR Arthrogram in all patients with suspected posterior instability. Sometimes a CT scan for bony lesions, glenoid deficiency and version may be required. Functional EMG is also helpful for complex muscle patterning disorders. Examination under anaesthesia and arthroscopy aids the diagnosis, although one should have most of the information before this.

If the primary abnormality is musle patterning and proprioceptive problems the physiotherapy is the main treatment. It is essential that this is undertaken by a therapist trained and experienced in dealing with shoulder instability, as the rehabilitation can be long and arduous. There needs to be a close relationship between the therapist and the surgeon, to ensure that if surgery is required this is done as part of the full rehab program and done timely in accordance with the rehab.

If the primary abnormality is found to be structural (eg. Bankart lesion, bony lesion or capsular injury) then surgery is often required early and the rehab follows accordingly.

Soft tissue injuries are much more common than bony. Most of my procedures for posterior instability have been soft tissue reconstructions. These include:

Bony abnormalities are rare, but should always be considered, especially in patients with failed soft tissue surgery and no muscle patterning or proprioceptive problems. These procedures include:

As most of the cases I have treated have been sports people with capsulolabral injuries, I prefer to surgically manage the vast majority of patients with arthroscopic repair. These are all patients with true structural lesions. Thise without true structural lesions are managed with arthroscopic thermal capsular shrinkage and intensive specialist physiotherapy.

The advantages of arthroscopic repair include:

The reported success rates are over 85% at 2 years, as long as the correct diagnosis is made and appropriate rehab applied. The key elements of successfully correcting posterior instability by arthroscopic means include increasing the glenohumeral stability ratio by restoring the glenolabral concavity, reducing the capsular redundancy to reset capsular tension for proprioceptive feedback, and rehabilitating scapulohumeral and scapulothoracic musculature (Antoniou, 2001).

Click on the Cases below to see some case of Arthroscopic Repairs:

The details of the post-op rehabilitation is in the Therapists Section .

Unidirectional posterior shoulder instability is much less common than anterior instability, however it should be strongly suspected in those high risk group of athletes with posteroir shoulder pain and/or clicking. The treatment involves a combination of skilled therapy and surgery for optimal outcome.