Introduction
The shoulder is a vulnerable joint in the swimmer. Ninety percent of the propulsive force in swimming comes from the upper extremity.
Upper extremity endurance is unique to swimming. Competitive athletes may swim 10,000 to 14,000m (6 to 8 miles) a day, 6 or 7 days a week. This equates to 16,000 shoulder revolutions per week (2500 revolutions per day). Many of these revolutions are done in sequence, without any rest for the muscles to recover. This continuous movement puts stress on the shoulders, leading to injury from repetitive microtrauma.

To add to the complexity of these mechanical characteristics of swimming is the fact that the shoulder is relatively unstable. When putting together the training distances, unique propulsive demands, and inherent shoulder laxity, the risk of injury is understandably high. Shoulder problems are reported in 66% of swimmers.

The earlier that a swimmer reports shoulder pain, the more specific the diagnosis can be. If the swimmer waits to report pain, inflammation has set in, and the pain is more global, masking the inciting symptoms. Global pain has led clinicians to make global diagnoses, such as swimmer's shoulder. Likewise, the treatment is then nonspecific with limited success.

As the freestyle swimmer approaches midrecovery, it is the humeral hyperextension that likely causes the pain. In this position, the humeral head is pushed anteriorly. Any anterior impingement, labral damage, or inflammation would be aggravated in this position. This is also know as hyper angulation and can cause internal impingement .

Pathomechanics
It is likely that the serratus anterior fatigues in swimmers with painful shoulders, producing an unstable scapula. To compensate, the rhomboids contract to stabilize the scapula.
Similar to the serratus anterior , the subscapularis is susceptible to fatigue because of its continual activity in swimmers with normal shoulders. Swimmers with painful shoulders may have fatigued their subscapularis . The subscapularis may also diminish its function to avoid the painful extremes of internal rotation, whereas the infraspinatus increases its activity to rotate externally the humerus for the same end goal.
There is no significant difference in the muscle firing of the primary muscles of propulsion (pectoralis major, latissimus dorsi, and posterior deltoid) when comparing swimmers with normal and painful shoulders. There is no significant difference in the muscle firing of the teres minor in swimmers with normal and painful shoulders. The muscles of propulsion as well as the pectoralis major and teres minor  force couple are intact. The supraspinatus muscle also functions normally as it compresses the head of the humerus in the glenoid.
This suggests that the key muscles on which to focus for injury prevention and rehabilitation in competitive freestyle swimmers is the serratus anterior and subscapularis . A stable scapula is paramount in preventing shoulder injuries. 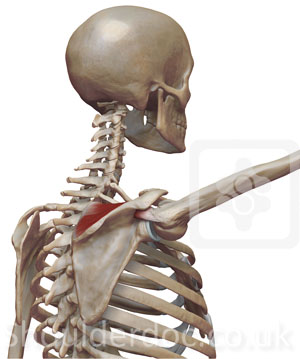 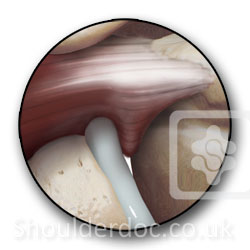 Diagnosis
The clasical sign of a painful or subtely unstable shoulder in a swimmer is a change in stroke pattern and reduced performance, along with the pain. Typically the 'lazy elbow' is not lifted high enough out of the water in middle recovery and the hand on the affected side enters the water too early. Pain during the recovery phase is most likely due to impigement (internal and/or subacromial), whilst pain during the pull-through phase could be indicative of more significant labral or cuff pathology.

Management
In swimmers there may be a unique complex combination of secondary subacromial impingement, internal impingement, tendonitis, laxity and muscle dicoordination. These may occur concurrently or in varying patterns.
It takes a skilled and experienced clinician to recognise and manage this. The approach should involve the combined input of an experienced shoulder surgeon, skilled therapist and coach. Early and appropriate treatment can avoid chronic shoulder problems in swimmers.