INTRODUCTION
Shoulder injuries in football (soccer) are not nearly as common as lower limb injuries such as the hip, knee or ankle.  The incidence in the reported literature is approximately 2-4% of all football injuries.  However shoulder injuries are generally more serious than many of the other more common injuries sustained and result in a longer time off play than other joint injuries.
In a study done by Ekstrand et al.1 a prospective cohort of European Professional Mens Teams were followed over a 7 year period from 2001 to 2008 registering almost 4,500 injuries.  Hip and groin injuries were the most common.  These injuries mainly had time off play/absence of less than 28 days, only 11% led to over 28 days absence from play.  However 28% of the shoulder injuries resulted in over 28 days of absence.
Due to the paucity of literature Funk and Batty undertook a study to analyse the incidence and treatment of shoulder injuries in Profession Football in the UK.  Anonymous and summarised date was kindly provided courtesy of Health Partners Europe Limited, Medical Insurers to the PFA (Professional Footballers Association).  Data was provided over a 3 year period from January 2007 to January 2010.  There were 35,000 claimed injuries in this period, of which 3.3% were shoulder injuries.  This is a total of 1,155 shoulder injuries or 385 serious shoulder injuries per year, which is still a significant number of injuries.
The percentage of shoulder injuries per year over the total shoulder injuries increased from 35% in the 2006/07 season to 85% in the 2008/09 season.  There was also a steady increase in the number of MRI scans but a similar number of MR Arthrograms were requested over the study period.  There was a significant increase in the number of surgical interventions from 12 in 2006/07 to over 20 in the 2009/10 season.  This bearing in mind that at the time of completion of the study the 2009/10 season had not yet finished.  The vast majority of the surgical procedures were arthroscopic stabilisations (29%) and labral repairs (17%) comprising 46% of the surgical cases. 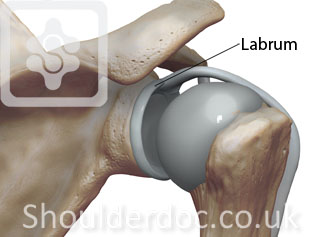 The glenoid labrum is similar to the meniscus of the knee.  It is a fibro cartilaginous structure which encircles the glenoid cavity deepening the socket providing static stability to the glenohumeral joint.  The labrum is described like a clock face with 12 oclock being superior, 3 oclock anterior, 6 oclock inferior and 9 oclock posterior.

The commonest mechanism of injury is forced abduction external rotation injury with anterior to posterior applied force on the arm resulting in a anterior dislocation or subluxation.  We have seen this typically occur in outfield players when jumping for the ball with an opponent and their arms in ABER position or when being struck by a ball with their arm in this position.  In goalkeepers diving for the ball with their arm extended overhead and being forced back or in contact with an opposing striker can lead to this mechanism of injury as well. 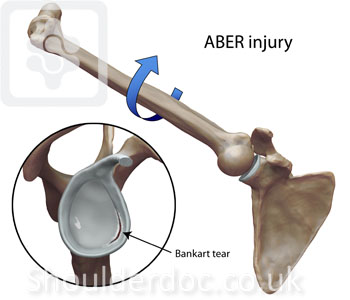 Posterior injuries can occur when the flexed arm in internal rotation usually as coming down from a high jump or when landing after a tackle.  We have not seen any posterior labral injuries or posterior dislocations in goalkeepers yet. 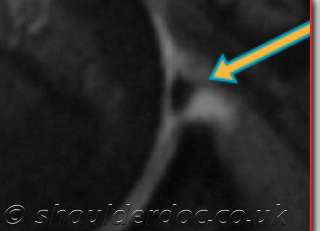 TREATMENT
Most patients with a labral injury and associated pathologies require surgical repair.  Some may be able to cope through the season and can be repaired at the end of the season.  These are usually the less significant injuries with lesser pathology on MR Arthrogram.  Large structural lesions such as bony Bankart injuries, rotator cuff tears and large Hill Sachs lesion generally require early surgical repair.  It is also better to perform an early repair on injuries sustained later in the season to avoid absence from play in the forthcoming season due to ongoing unresolved pathology.
Soft tissue labral capsular and rotator cuff repairs are generally performed arthroscopically with early return to play and excellent outcomes with recurrence rates to be expected of less than 7%.  Significant bony lesions, particularly large chronic bony Bankart lesions with glenoid deficiency require bony reconstruction procedures and the most popular procedure at the moment is the Latarjet coracoid transfer triple block procedure.  For more information on these procedures and the surgical technique please click here . 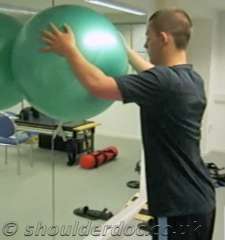 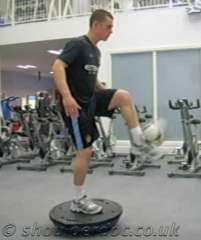 The treatment of the rotator cuff pathologies depended on the severity of the pathology as well as the significance of the symptoms of the patient.  Mild impingement symptoms with bursitis were treated with rehabilitation and subacromial steroid injection if required.  Partial thickness rotator cuff tears were treated with arthroscopic debridement or repair depending on the severity of the tear.  However 4 players that were early or mid-season and able to continue playing although with significant discomfort Platelet Rich Plasma injections were used.  For full thickness rotator cuff tears arthroscopic repair was undertaken.

SUMMARY
Shoulder injuries are not common in football but they are significant injuries and result in a significant absence from play.  Outfield players generally sustained labral injuries with subluxations or dislocations whereas goalkeepers generally suffer with rotator cuff pathology due to the nature of their position and requirements.  MR Arthrogram is the investigation of choice for shoulder injuries in football and arthroscopic surgery generally can treat most pathologies.  Rehabilitation should be sports specific for that particular player, their position, requirements and contribution to the team.