Shoulder injuries are common with the highest proportion of missed playing days after any regional injury of the body.  This is naturally a growing concern for players, coaches and clubs in a high demand sport.

Before we can look at methods of prevention and screening we need to understand the risk factors for injury of the shoulder in rugby and how to reduce these risk factors. In this article I hope to summarise the key elements that have been studied so far.

Training, Speed and Aerobic Capacity
Gabbett & Domrow (AJSM 2005) evaluated performance risk factors in rugby league.  They found that players who had completed less than eighteen weeks of training before sustaining an initial injury were at a high risk of recurrent injury. The risk of injury was also greater in players with a low 10 and 40 metre speed in running.  Players with a low maximal aerobic power also had a greater risk of sustaining a contact injury.  They concluded that the findings highlighted the importance of speed and endurance training to enhance performance and reduce the incidence of injury in rugby.

Forces
The forces involved in rugby have increased over the years where the size of rugby players in rugby union increased from 94kgs in the 1980’s to 110kgs in the 2000’s in the forward pack.  The predicted weight of rugby union forwards in the 2020’s is expected to be a 121kgs.  In the backs the average weight in the 1980’s was 78kgs, 90kgs in the 2000’s and predicted to be 100kgs in the 2020’s.  Therefore a back in the 2020’s would be equivalent to the size and weight of a forward in the 1990’s.  Since force = mass x acceleration and rugby players are not only getting bigger and heavier but also getting faster the impact forces are predictably increasing.  In the 2010 Rugby League Four Nations the England team trialed GPS systems.  John Wilkin wrote in February 2010 “the new GPS system which we wore during the Four Nations attached to a man bra under our shirts consistently showed us that we were taking impacts of 10g’s and upwards during a match.  The gravity force of a car travelling at a 100kms per hour that comes to a stop in 0.2 seconds is 14.2g’s and we don’t have airbags.”  As you can see the forces involved in rugby tackles is equivalent to a car crash.

Fatigue
The hours lost to injury in international sport (per 1000 playing hours) is highest in rugby, this being 220 compared to 112 in American Football, 80 in ice hockey, 40 in football and 10 in cricket.  A factor thought to contribute to the increasing risk rate of injuries is also fatigue.  Peter Keen, former coach to Chris Boardman stated “nature has given the human body a wonderful engine management system.  It actually responds to stress by adapting to cope with it better.  The bottom line is the body does not get fitter through exercise, it gets fitter through recovering from exercise.”  In the graph below you can see the known effect of adaptation in response to work and recovery and you can see that tissue adaptation increases during the phase of recovery and significantly drops after the work and fatigue.  Periods of recovery are essential for the body to recuperate and become stronger. 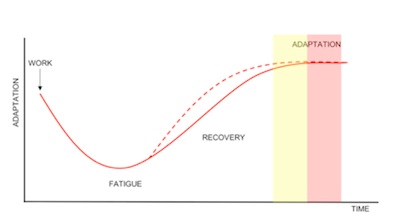 In addition to this we also performed a review of the GPS data from the 2010 Four Nations (Easton, Brewer, Hayton and Funk 2010).  We found that through the Four Nations tournament the number of impacts per minute decreased from 16 in the game against France to 8 in the game against Australia.  We felt this was an evidence of fatigue through the tournament.  There was also an increased associated incidence of injury.  Clive Brewer has stated “given that the majority of rugby league injuries occur in tackles and in the second half of matches, injury prevention strategies and physical fitness training could include game specific attacking and defensive drills practiced under fatigue conditions to encourage players to make appropriate decisions and apply learned skills during the pressure and fatigue of competitive matches. 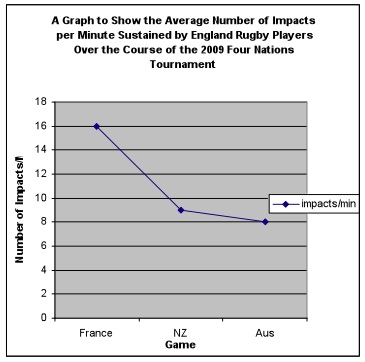 Fuller et al. (BJSM 2007, 2008 and 2010) have shown in rugby union that tackling had the highest risk of upper limb injury.  The incidence was significantly higher in games than in training and there were more injuries in the second half of the game, again confirming the fatigue element.

In 2008 ((Physical Therapy in Sport, 2008) the same group demonstrated that repetitive tackling of a tackle bag led to a reduced JPS at end of shoulder range of movement. This suggested that tackling fatigue led to poor JPS, and thus a higher risk of shoulder injury.

Laxity
Another associated factor pre-disposing to injury is inherent shoulder laxity.  This has been shown by Cheng et al. JBJSB 2007 that rugby players with shoulder laxity as determined by static laxity testing of the shoulder had a higher risk of dislocation in rugby.  Akhtar and Robinson BJSM 2010 showed a higher Beighton score in athletes who had suffered shoulder dislocations.

Meeuwiss & Fowler (Can.J. Sports Sci. 1988) developed an injury reduction pre-disposition model showing the complex interaction between internal and external risk factors as mentioned above.  This very eloquently summarises the effect of a pre-disposed athlete exposed to extrinsic risk factors making a susceptible athlete an inciting event on a susceptible athlete subsequently leads to injury.  It is these pre-dispositions and susceptibility that we wish to control with prevention and screening.

Headey (American Journal of Sports Medicine 2007) summarised the issue by quoting “reducing the length of individual training sessions might be effective in reducing the incidents and severity of shoulder injury although further research into the optimal length of training sessions would be of clinical value specifically to assess the relationship between length of session and risk of any injury not simply damage to shoulders.  Any indication for a reduction in session duration to reduce injury burden would need to be balanced against the need to prepare adequately for matches and optimise skill development.”

Conclusion
In summary the factors we have identified as possibly having an influence on shoulder injury risk in rugby are:


Sport Factors:
In this article we have reviewed the pre-disposing and risk factors to injury in rugby.  This provides a useful basis for introducing some foundations for an injury prevention programme.