Introduction
Effective pain control following shoulder surgery is challenging, particularly arthroscopic procedures where the skin incisions do not adequately reflect the extent of the underlying surgery[1]. Moderate-to-severe pain is known to occur for more than 48 hours following shoulder surgery[2–4], meaning timely and effective analgesia is paramount. Post-operative pain is one of the leading causes of a prolonged inpatient stay and readmissions[5]. An increasing acceptance of shoulder surgery as a day-case procedure[1] and implementation of optimal analgesic regimen has allowed early patient discharge that would previously require an overnight inpatient stay[3]. Furthermore, managing the patient’s pain is an essential component of the overall recovery process[4]. A pain-free recovery has been shown to reduce post-operative complications and promote early mobilisation of the joint to allow effective rehabilitation[6]. Minimal pain experienced by the patient during the recovery period also increases patient well-being and satisfaction[4].
The overall aim of this document is to review the latest literature in view of new evidence and update our current practice. This would ultimately optimise post-operative pain control. The article explores the relevant literature around how pain control can be best optimised following day-case shoulder surgery.

Literature Review
Over the last decade, shoulder surgery has become more accepted as a day-case procedure owing to both the developments in techniques and an emphasis on effective post-operative pain management[1,3]. Today, many shoulder procedures require up to an hour of operating time, which has produced benefits of shorter inpatient stay, greater patient satisfaction, and shorter waiting times for procedures[1]. The most important factor has been the improvement in the strategies implemented to minimise a patient’s pain following traditionally painful shoulder procedures[4]. The mainstay of pain relief has been the combination of interscalene brachial plexus block that is supplemented with oral analgesics. The main concern is that patients may experience severe pain as the interscalene block subsides[7], and so the use of supplementary oral analgesics can maintain a therapeutic level of pain relief[3]. Additionally supplementing this regimen with patient education and physical therapies, such as local cold compression, has been shown to reduce post-operative complications and allow early, pain-free rehabilitation[6]. Furthermore, an established, evidence-based regimen can reduce the need for excessive post-operative opioid use to avoid the common side effect of nausea and vomiting[7], and the risk of future misuse in opioid naive patients[8].

Analgesic Regimen
All patients who undergo shoulder surgery as a day-case procedure under the our care follow a very similar regimen, differing only in the presence of individual contraindications. This starts before the day of surgery where the patient is consulted on the pre-, intra-, and post-operative analgesia that can be used.
On the day of surgery, a single shot interscalene block with Chirocaine 1-2mg/Kg is given pre-operatively. The patient is awake in 90% of cases, with the remainder anaesthetised prior to administering the block[1]. It is usual practice for all patients to then be anaesthetised before the start of the operation. Intra-operatively, 1g of paracetamol is infused intravenously through the patient’s cannula. The block is known to provide local analgesia for a minimum of 12 hours and rarely exceeds 24 hours[7,9]. Therefore, this already promotes opioid avoidance, which has a significant benefit in reducing the incidence of post-operative nausea and vomiting[7] in the hours following surgery.Local anaesthetic is also used at the site of surgery in most cases and a hyaluronan (Viscoseal, TRB Chemedica) is injected into the joint for arthroscopic procedures. This has been shown to restore the joint fluid homeostasis and reduce post-op pain by stimulating endogenous hyaluronan production, coating pain receptors and a localised anti-inflammatory effect.
Upon discharge, patients are prescribed two-weeks of analgesia that follow the principals of the World Health Organisation (WHO) pain ladder[10]. This includes the following medications to be taken in the following frequencies; paracetamol 1g 4-hourly; ibuprofen 400mg 6-hourly; codeine 60mg 4-hourly. Patients are verbally instructed to commence this regimen 8-10 hours after surgery, with a second dose before the patient goes to bed that night. It is advised that should the patient wake during the night, they should have a third dose of the regimen, provided this is at least four hours after their second dose. In some cases the anti-inflammatory is omitted, such as certain tendon repairs and any contra-indications, such as gastritis. The prescription also includes a 100mL bottle of Oramorph to be used for breakthrough pain. Additionally, the patient is provided with a cold compression cuff to be worn from three hours after surgery, every two hours, for 15 minutes at a time[1]. The entire analgesic regimen used for these patients is illustrated as a flow chart in Figure 1. 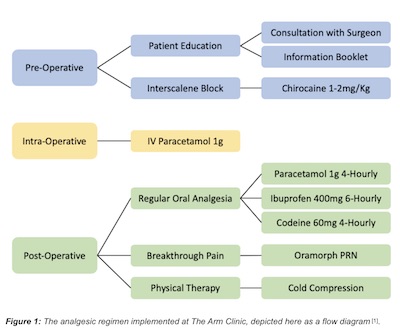 Pre-emptive, Preventative and Multimodal Analgesia
Post-operative pain is a leading cause for a prolonged inpatient stay[5], and it is a common concern for patients prior to surgery[11]. Post-operative pain has also shown to increase complications, prevent effective and pain-free rehabilitation[4,11], and delayed return of normal functioning.
The pain experienced after surgery is fundamentally caused by noxious stimulation of receptors found in the tissues of the surgical site. The threshold of the nerve ending to nociceptive pain is further reduced by the inflammatory infiltrates to the local area, which is peripheral sensitisation[11]. The afferent impulses that follow peripheral stimulation of local nerve endings can lead to central sensitisation as the central neurones produce a heightened response to what is a normal stimulus[12]. The combination of both peripheral and central sensitisation can lead to a globally increased sensitivity to nociception at the operative area[11]. The concepts of pain management in surgery, in particular ‘pre-emptive’, ‘preventative’ and ‘multimodal’ analgesia, are aimed at targeting these routes that cause the challenging issues associated with post-operative pain.
The idea of ‘pre-emptive’ and ‘preventative’ analgesia works on the concept of avoiding the onset of post-operative pain by preventing peripheral and central sensitisation rather than treating the pain at onset[12]. ‘Pre-emptive’ analgesia uses analgesia prior to the insult of surgery, such as an interscalene nerve block, to reduce nociceptive stimulation at peripheral nerve endings. The evidence for the effectiveness of this technique is somewhat debatable[12]. ‘Preventative’ analgesia acts alongside ‘pre-emptive’ analgesia by limiting further peripheral sensitisation of nerve endings that likely ensue during the intra-operative and post-operative periods[11].
‘Multimodal’ analgesia is a concept that has grown in popularity as an approach to post-operative pain management[13]. When compared with opioid-based analgesia, it often provides superior pain control with the added benefit of reducing the requirements of opioids and their adverse effects[14,15]. The technique involves using analgesics of differing classes that have varying target sites, but that also work synergistically to achieve optimal pain control[14]. This is often defined as the use of two or more analgesics whose mechanism of action are distinct from one another[11]. Owing to the marked reductions in pain scores when using synergistic analgesia, this technique is a recommended for optimising pain control post-operatively[14].

The Opioid Crisis
There is currently (in 2019) a public health crisis occurring within the UK. Writing on the opioid crisis just in February 2019, BBC News[16] reported: “Prescriptions for opioid painkillers have increased by 60% in the UK during the last decade, and the number of codeine-related deaths in England and Wales has more than doubled”. This is following The United States Government declaring a national health emergency, prompted by recent figures showing approximately 530 people die each week as a consequence of opioid overdose[17]. Non-fatal opioid overdoses have risen by more than 50% over the last 10 years, with the majority occurring in patients prescribed opioids on a non-chronic basis[8]. Whilst much of the attention is focused on opioid prescribing for chronic pain, it is easy to ignore the shortfalls in the acute areas of medicine. Unfortunately, the epidemic in the United States and the crisis currently in the UK is a by-product of overprescribing by doctors[8,18].
Opioid prescribing varies in frequency for post-operative patients. In 2017, a large cohort study of ‘opioid-naive’ patients revealed a rate of new persistent opioid use between 5.9% and 6.5% (defined as the use of opioids for more than 90 days post-surgery), but data varies between 3% and 10% internationally[17]. Furthermore, up to 80% of the prescribed opioids were unused in those patients who did not become chronic users[8]. These statistics further evidence the major contribution that physicians have in the war against an opioid epidemic in the UK.
Opioid prescribing in orthopaedic surgery has been rife in previous years. In 2009, it accounted for approximately 7.7% of all opioid prescriptions in the United States[19], this is despite evidence suggesting the ‘multimodal’ approach to be more effective in managing post-operative pain[14]. In fact, the Oxford League Table of Analgesics in Acute Pain[20] show that the analgesics used in the regimen at The Arm Clinic are more effective than common opioid doses included in the table. Paracetamol and Codeine 1g/60mg, and Ibuprofen 400mg reveal the numbers needed to treat (NNT) to be 2.2 and 2.5 respectively, whilst the best performing opioid (Tramadol 150mg) has a NNT of 2.9[20]. This highlights that by implementing an evidence-based analgesic regimen, optimal pain relief following shoulder surgery can be achieved all while reducing opioid prescriptions post-operatively and minimising the contributions to the current opioid crisis.

Pre-operative patient education has been shown to be extremely valuable in reducing patient anxieties and therefore reducing the amoiunt of analgesia and stress after surgery. The use of leaflets and booklets, as well as pre-operative assessment clinics all contribute to this. Pre-habilitation with an experienced therapist is also beneficial in our experience. Post-operative recovery phone calls are also beneficial and we assessed this in our practice in 2016 (see infographic below). These have been well received by patients and have clarified the information given pre-op and on discharge. Psycho-social factors are an important part of multi-modal pain therapy and can reduce the need for opiods.

Conclusions
Post-operative pain following shoulder surgery is a troubling issue for both patient and surgeon. With shoulder procedures becoming a mainstay in day-case surgery, the greater volume of throughput and earlier discharges of patients has necessitated the need for optimal pain control in the community. Although opioid analgesics have long been the mainstay of pain relief following orthopaedic procedures, current evidence in the literature is indicating the use of non-opioid regimens and multi-modal therapy better conquer post-operative pain. Furthermore, the associated adverse effects of opioids and the ongoing issues with opioid prescriptions worldwide further demonstrate the need for a collective movement towards better, less opioid-dependent analgesic regimens following shoulder surgery. This has led us to reduce the use of routine opioids after surgery and incorporate multimodal therapy of cold compression, hyaluronans, paracetamol and opioids only for breakthrough pain for a limited time.
This review led to the development of new patient information documents for our practice.