1. Make one short limb (the post) and one long limb(the loop).

3. Throw the loop strand around the loop.

4. A second pass around only the post is followed by the end of the loop limb being brought up through the parallel limbs between the first and second loops.

5 & 6. The knot is tensioned and pushed into the joint with the knot pusher on the post. 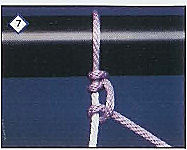 7 & 8. The knot is secured with several half hitches in alternae directions.