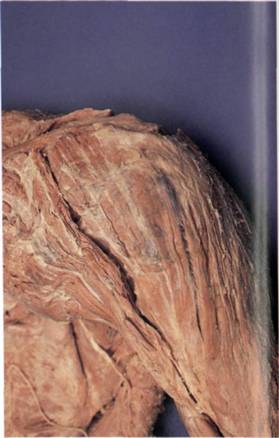 Figure 1.12 Muscular anatomy of the left shoulder seen from the front. 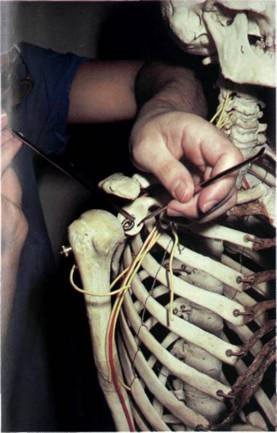 Figures 1.13 and 1.14 The anterior portal is made half way between the anterior edge of the acromion and the coracoid process, as shown on the skeleton. 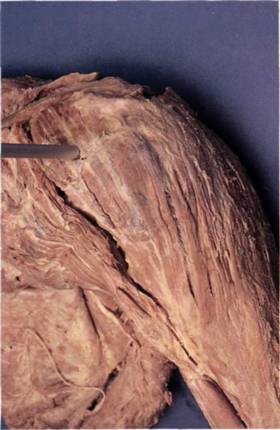 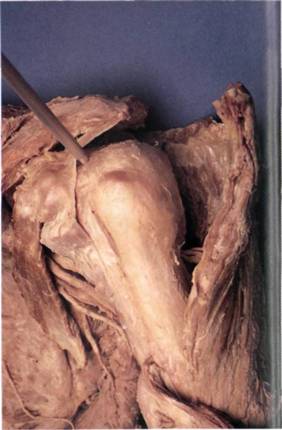 Figure 1.15 &1.16 The arthroscope passes through the anterior deltoid, lateral to the cephalic vein. The deltoid is now dissected from its origin on the acromion and folded laterally to show the path of the anterior portal. In this dissection, the arthroscope is shown passing the edge of the coracoacromial ligament. Usually, however, it passes through the ligament. Note the position of the brachial plexus.

Deltoid is now dissected free from its anterior origin on the clavicle and anterior border of the acromion. Pectoralis major is folded out later­ally to expose the tendons of pectoralis minor and the conjoined tendons of coracobrachialis and short head of biceps originating from the coracoid process (Figure 1.16). The brachial plexus can be seen 5cm below the coracoid. The musculocutaneous nerve leaves the lateral cord of the brachial plexus and enters the coracobrachialis muscle at a variable site 2-5 cm distal to the coracoid process. The mus­culocutaneous nerve supplies coracobrachialis and the short head of biceps as it passes through these muscles; it then supplies the rest of biceps and brachialis to emerge in the cubital fossa of the elbow as the lateral cuta­neous nerve of the forearm.

The brachial plexus emerges from the axilla as three large mixed motor and sensory nerves (median, ulnar and radial) and two purely sensory nerves (medial cutaneous nerves of arm and forearm). The radial nerve is a con­tinuation of the posterior cord and passes through the triangular space below teres major, with the humeral shaft laterally and the long head of triceps medially. The remaining nerves surround the axillary artery and vein and run on to the medial side of the arm. 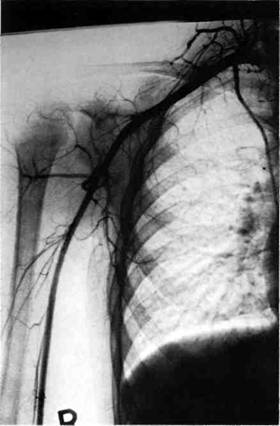 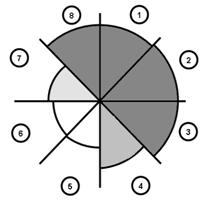 Figure 1.17 Arteriogram showing the major branches of the axillary artery.

Figure 1.18 Arteriogram showing a close-up of the axillary artery. The patient had a traumatic false aneurysm of the posterior circumflex humeral artery.

The axillary artery (Figures 1.17 and 1.18) has six branches. The first is the superior thoracic artery which leaves the upper third of the main artery to run forward and supply the pectoral muscles. The next two branches - the acromiothoracic and lateral pectoral arteries -leave the middle third of the axillary artery as it passes under pectoralis minor. The acro­miothoracic artery divides into four branches: the pectoral branches pierce the clavipectoral fascia and pass down to the muscle; the deltoid branch pierces the fascia and passes along within or under the deltoid paralleling the clavicle; and the acromial branch passes up alongside the coracoacromial ligament. The lateral thoracic artery passes down the chest wall on serratus anterior, supplying the pectoral muscles (and in women the breast). The final three branches leave the third part of the axillary artery. The largest branch of this artery is the subscapular artery whose circum­flex scapular branch anastomoses with the suprascapular artery. The anterior circumflex humeral artery runs along the inferior border of the subscapularis tendon to the humerus; here it gives an ascending branch which supplies the long head of biceps as it passes up the bicipital sulcus and goes on to supply the capsule and humeral head. The trunk of the anterior circumflex humeral artery passes around the humerus to anastomose with its larger partner, the posterior humeral circumflex artery, which has accompanied the axillary nerve through the quadrilateral space.

The coracoacromial ligament can be seen passing from coracoid to acromion. It is a large triangular ligament which inserts onto the undersurface of the anterior acromion, an important point to note when it comes to subacromial decompression. Having passed through deltoid, the instruments pass through the coracoacromial ligament or skirt its free edge to enter the joint just above the superior edge of the subscapularis muscle. Detrisac and Johnson8 describe an occasional anterior capsular artery in close proximity to the super­ior glenohumeral ligament which can be dam­aged as the instrument traverses the anterior capsule at this point.