To the arthroscopic surgeon, the subacromial bursa is another cavity for exploration. This is helped by the fact that this is the largest bursa in the body and readily accepts 15 ml saline, just under half the capacity of the glenohumeral joint itself. Moreover the subacromial bursa is of particular interest to the shoulder surgeon since it is found at the impingement point, allowing the pathology of impingement to be seen. In fact the subacromial space is only a potential space, the bursa being two membra­nous surfaces separated by a thin film of lubricating fluid. It is only when the surgeon distends the bursa with irrigating fluid that a measurable space is created. 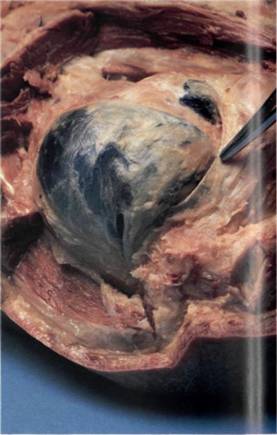 Figure 1.22 In this dissection of a left shoulder, seen from above, the subacromial bursa has been filled with blue gelatin. The forceps point to the centre of the free margin of the coracoacromial ligament. Note that the bursa hardly extends under the acromion at all.

The first thing that the arthroscopic surgeon must understand is how far anterior the bursa is, for it is misnamed and should be called the subcoracoacromial ligament bursa. Figure 1.22 shows a dissection of the bursa which was prefilled with latex. As can be seen, the centre of the bursa is under the junction of the upper and middle thirds of the coracoacromial liga­ment, and the bursa hardly extends under the acromion at all. This is of vital importance to the arthroscopist, as the most common arthrosco­pic error is failure to enter the bursa, usually due to inability to visualize where the bursa ends.

Codman10 dissected over 500 subacromial bursae and his detailed description is essential reading for arthroscopists. Prior to Codman's dissections, anatomists believed that there were separate subacromial, subdeltoid and subcoracoid bursae. Codman showed that these three were one, although sometimes the subacromial bursa could be partly loculated with plicae, just as the suprapatellar pouch may be subdivided by the suprapatellar plicae.

Strizak et al11 found that three distinct com­ponents of the bursa could be identified in 15 dissections: subacromial, subdeltoid and sub­coracoid. In 14 of these dissections, the sub­acromial and subdeltoid portions were con­fluent, but in one a septum separated the two portions. The subcoracoid portion was only identified in three dissections, extending more interiorly and lying between subscapularis and coracoid, but never connecting with the gleno­humeral joint. 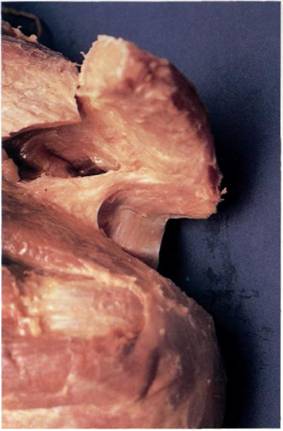 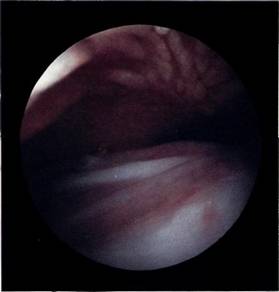 Figure 1.23 Note how the coracoacromial ligament inserts into the undersurface of the acromion.

Figure 1.24 An arthroscopic view of the subacromial space showing the deltoid nsertion.

The roof corresponds to the middle and upper thirds of the coracoacromial ligament,
the anterior third of the acromion and the undersurface of the acromioclavicular joint. It should be noted how the coracoacromial liga­ment inserts onto the undersurface of the anterior third of the acromion (Figure 1.23). Both the roof and the floor firmly adhere to these tissues.The walls can only be described when the bursa is inflated, an unnatural condition. Moreover, if the bursa is inflated it changes shape from two flat surfaces in apposition to a sphere. As the height of the space increases, its diameter must decrease correspondingly, changing the position of the walls. Perhaps it would be better to call the walls the 'reflections' of the bursa. The lateral reflection is under the deltoid muscle (Figure 1.24)11; the posterior reflection, at the junction of the anterior and middle thirds of the acromion; the anterior reflection, under the coracoacromial ligament or, if a subcoracoid extension is present, under the coracoid; the medial reflection, under the acromioclavicular joint.

For more detailed descriptions, the reader should study the works of Codman,10 Strizak,11 Laumann12 and Matthews et al.13,14