The glenohumeral ligaments are always a source of great interest, as such a high propor­tion of shoulder disability is related to anterior dislocation or subluxation. The anterior shoul­der capsule was described by Galen, but the three glenohumeral ligaments were only descri­bed and named in the last century. The import­ance of these ligaments has really only come to the fore with the advent of shoulder arthro­scopy, as they are far more obvious from inside the joint than from outside. A great amount has been written about the glenohumeral ligaments and their importance in recurrent dislocation, but for those interested in shoulder arthroscopy the paper of Turkel et al[3] is essential reading (Figure 5.19).

The superior glenohumeral ligament lies above the subscapularis recess and makes up the superior margin of the foramen of Wiet-brecht. This ligament is often partially hidden by the long head of biceps when arthroscoping from the posterior portal (Figure 5.20). 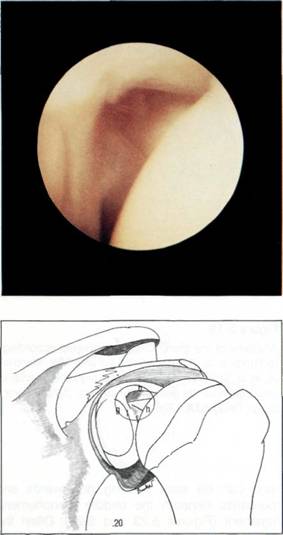 Figure 5.20 The superior glenohumeral ligament is often hidden by the long head of the biceps tendon, b = biceps, h = humerus, I = labrum, g = glenoid. 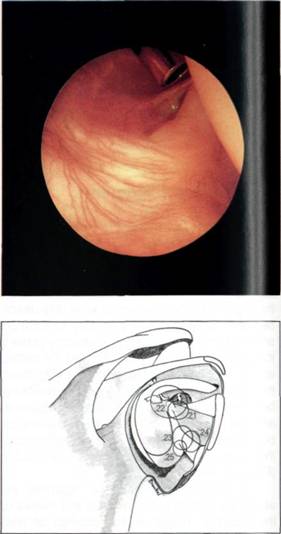 Figure 5.21 The middle glenohumeral ligament may be thin and wispy.

Figure 5.22 Alternatively, the middle glenohumeral ligament may be thick.

The inferior glenohumeral ligament is the strongest and most important of the glenohu­meral ligaments. The superior band is constant and can be seen passing downwards and outwards beneath the middle glenohumeral ligament (Figures 5.23 and 5.24). Often the inferior glenohumeral ligament can distinctly be seen as a prolongation of the anterior labrum (Figure 5.25). O'Brien and Warren[4] have looked in detail at the gross and microscopical nature of this ligament. They liken the ligament to a hammock, strung between the glenoid and the humeral head (Figure 5.26). The two ropes holding the hammock are the anterior superior band and, at the back, the posterior superior band. They have shown that the ligament thickens at these two points and that the configuration of the collagen bundles varies within the ligament, passing coronally between the glenoid and the humerus in the thickened superior bands, and sagittally in the substance of the ligament between these bands. So it is the latter that makes up the infraglenoid recess which, with the arm at the side, is a capacious space (Figures 5.27, 5.28 and 5.29). 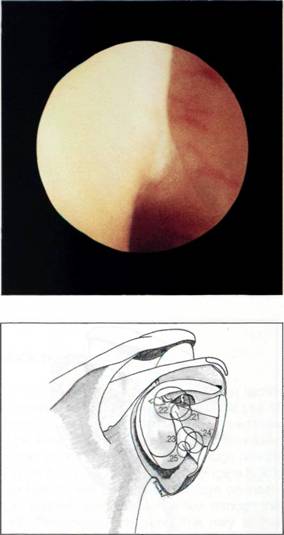 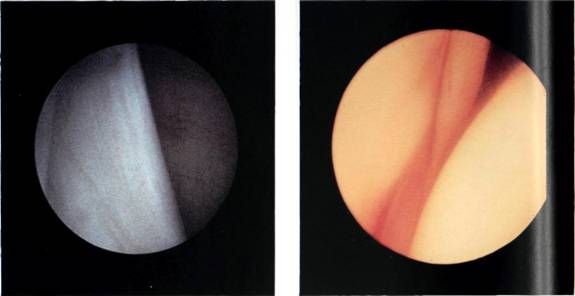 Figures 5.23, 5.24 and 5.25 The superior band of the inferior glenohumeral ligament originates from the labrum.

Figure 5.26 The inferior glenohumeral ligament can be likened to a hammock, the superior bands at the front and the back being the ropes which hold up the hammock. 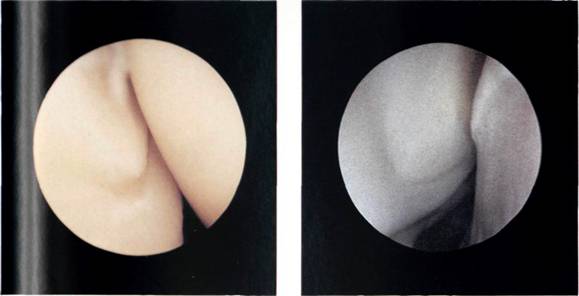 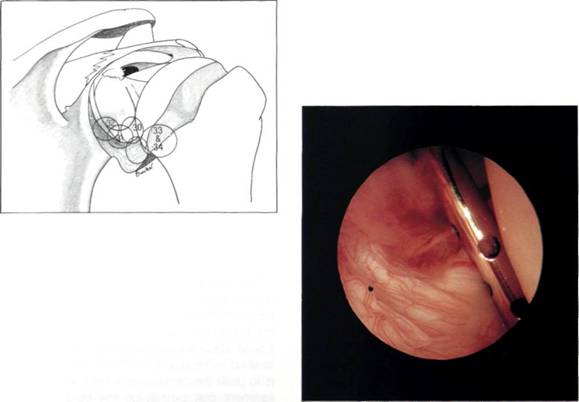 The arthroscope is now rotated within the infraglenoid recess to see the synovial reflec­tion on the humeral neck. The arthroscope is now withdrawn gradually with rotation, for it is easy to withdraw too far at this point and exit the joint through the puncture point in the posterior capsule. As the arthroscope is rotated, so the posterior glenoid labrum can be seen (Figures 5.30, 5.31 and 5.32) and behind it the posterior gutter or synovial recess. As the arthroscope is rotated in the other direction, so the posterior surface of the humeral head is observed. At this point, it is important to look carefully at the synovial reflection, or so-called bare area of the humeral head (Figures 5.33 and 5.34) as it is easy for the inexpert arthro-scopist to mistake this for a Hill-Sachs lesion. The difference is that the bare area coalesces with the synovial reflection on the neck of the humerus, whereas a Hill-Sachs lesion has a ridge of bone or cartilage between it and the bare area. The bare area often has small pits or holes in it which can clearly be seen, and the junction between it and the articular surface of the head is more normal than the rounded-off fracture of a Hill-Sachs lesion. Further with­drawal and rotation brings the arthroscope back into the triangle between the long head of biceps, the humeral head and the glenoid.

As with arthroscopy of the knee, further tactile information can now be gleaned by the use of a hook probe. This is more difficult to insert than in the knee, and when learning it is often easier to start probing with a 14- or 12-gauge needle (Figure 5.35), or a Verres needle (Figure 5.36). The needle will cause less damage on inser­tion, and will also establish a flow through the joint. This clears any blood that may at this stage have started to obscure vision. If a hook probe is used it often helps to make a track with a sharp obturator and cannula from the anterior portal and then pass the hook down this track. Probing the glenoid labrum may show a Bankart lesion, or confirm one, if suspected. The ligaments can be probed in turn and then the long head of biceps and the superior cuff can be palpated.

On completion of the examination, the joint is thoroughly flushed through, the fluid removed from the shoulder, and the probe and arthro­scope withdrawn.