The classic paper on stabilizing mechanisms preventing anterior dislocation of the glenohumeral joint by Turkel et al[5] should be read by all orthopaedic surgeons with an interest in shoulder dislocation. Turkel performed studies on 46 cadaveric shoulders with selective sec­tioning of the anterior structures to identify the relative contribution of each to shoulder insta­bility, in various positions of the shoulder. The shoulder joints were opened posteriorly and wire sutures were inserted to mark the superior border of the middle glenohumeral ligament (MGHL), the superior and inferior margins of the thickening of the anterior inferior glenohu­meral ligament (AIGHL) and the superior and inferior margins of the subscapularis muscle (marked from in front). Radiographs were then taken with the shoulder at 0, 45 and 90 degrees of abduction in external rotation (Figure 9.4). They concluded that at 0 degrees of abduction, anterior dislocation is prevented largely by subscapularis but, as the shoulder reaches 90 degrees abduction in external rotation (the position of apprehension), then the subscapu­laris rolls over the top of the humeral head and its inferior margin rides up exposing the lower half of the anterior surface of the head. The AIGHL was tight in this position and was the only structure covering the vulnerable antero­inferior portion of the humeral head. 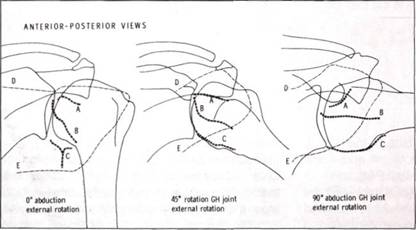 Anatomically we have seen that the anterior labrum is an extension of the AIGHL complex, and the Bankart lesion is an avulsion of the AIGHL complex from its origin on the scapula. O'Brien and colleagues6 have drawn attention to the role of the posterior band of the IGHL, and have shown how the IGHL can be likened to a hammock upon which the humeral head rests (see Figure 5.26). The Bankart lesion can be likened to section of one of the ropes supporting the hammock, and thus the head falls forward (Figure 9.5). Oveison and Nielson7 have shown that a large lesion of the posterior capsule is needed for anterior dislocation and puts forward the concept of the capsule as a ring, the anterior part of which can only break if the posterior section comes forward as well. In the 10-15 per cent of patients who are not shown to have a Bankart lesion, two factors must be considered. The first is that the diagnosis is incorrect, these patients may in fact be AMBRI with a lax AIGHL, in which case they must not undergo arthroscopic repair (Figure 9.6). The second is that the diagnosis of recurrent TUBS is correct but there has been plastic deformation, or stretching of the AIGHL rather than avulsion from its origin and these patients will need an inferior capsular shift. 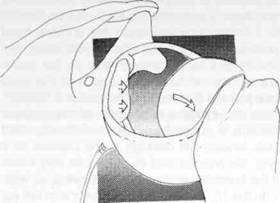 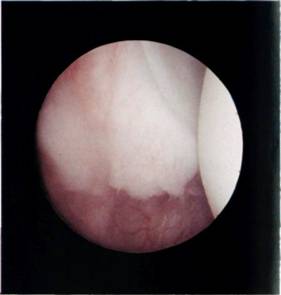 Figure 9.5 O'Brien et al6 have described the inferior glenohumeral ligament/labral complex as a hammock, upon which the head lies. When the front supporting rope of the hammock is cut then the humeral head falls 'out of bed'.

Figure 9.6 Multidirectional instability. Note the inferior shift of the humeral head so that its equator has almost slipped over the inferior glenoid into the infraglenoid recess.

Fracture of the glenoid rim is a further contraindication to arthroscopic repair. The defect should be selectively repaired, which may mean a bony operation to restore the anterior glenoid. However, it should be said at this point that such a massive defect is rarely encountered. Minor crevassing of the anterior glenoid rim (Figure 9.7) is not a contraindication to arthroscopic repair. 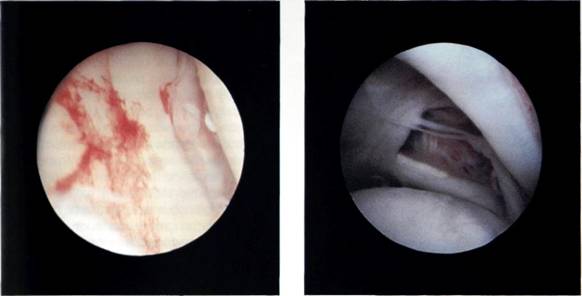 Figure 9.8 The labrum has been traumatized so much that it has disappeared from a long segment of the anterior glenoid.

Unfortunately, by the time patients are refer­red for surgery, they have often had multiple episodes of recurrent dislocation, and what may have started as a simple avulsion of the AIGHL complex (Bankart lesion) undergoes repeated trauma, the Bankart lesion extends, the labrum fibrillates and tears within its sub­stance and eventually disintegrates so that there is no trace left of it or the middle or inferior glenohumeral ligaments (Figure 9.8). Arthro­scopic repair of the Bankart lesion is now impossible, and although Caspari's group have performed arthroscopic augmentations, the less experienced arthroscopic surgeon should abort the arthroscopy and move on to selective open repair. To abort an arthroscopic proce­dure is a sign of wisdom on the part of the surgeon, not an admission of failure.