Caspari and Rose have each devised a method of picking up the IGHL labrum complex with a suturing device. Caspari devised a suture punch which could be used to deliver a suture through the superior band of the IGHL. The problem with the suture punch is its size, in particular withdrawing it from the front of the joint with its jaws open. Rose's suture passer (Figures 9.18 and 9.19) is easier to insert into the joint but needs a separate instrument to grasp the free end of the suture to withdraw it from the joint (Figure 9.20). In both techniques, the sutures, once inserted into the Bankart lesion, are passed on a suture pin through the glenoid so as to shift and tighten the IGHL labrum complex and hold it down to the prepared glenoid neck (Figure 9.21). 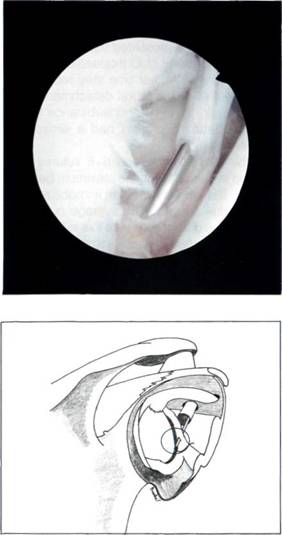 Figures 9.18 and 9.19 Rose's suture passer is used to pass a suture through the glenoid labrum.

Figure 9.20 The suture placed through the labrum and exiting the cannula. 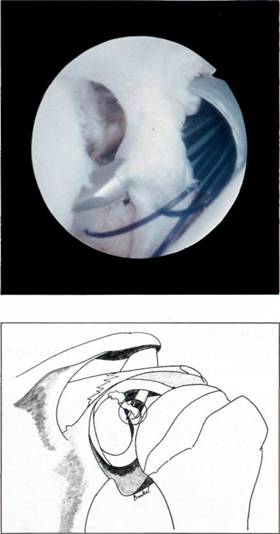 Figure 9.21 With several sutures placed, the suture pin is inserted through the prepared glenoid neck. The sutures are taken through the glenoid to be tied over the infraspinatus fascia.

Caspari et al also presented their results at the American Academy of Orthopaedic Surgeons' 1989 meeting.[13] At that time they reported on 100 cases: 49 with a labral detachment had a suture repair, 51 with a midsubstance tear of the IGHL labrum complex had a semiclosed augmentation.

In the 49 suture repairs, 5-8 sutures were inserted in each patient, the maximum being 12 sutures. The patients wore an immobilizer for 3 months after surgery. The average number of preoperative dislocations was five in this group, 92 per cent had a satisfactory result, two patients had a further dislocation and two patients a further subluxation.

Of the 51 patients who had an augmentation, 80 per cent had a satisfactory result. These patients had an average of 19 preoperative episodes of dislocation, there were eight redislocations, seven in American football players, and one in a road traffic accident. This is an extremely difficult technique which is beyond the remit of this book.