On 14 September 1982, Johnson performed the first arthroscopic repair for anterior disloca­tion of the shoulder at Ingham Medical Center, Lansing, Michigan (Johnson LL, Detrisac DA, personal communication, 1983). The patient had sustained a traumatic anterior dislocation 6 months previously, with 100 subsequent dislocations, four in the week prior to surgery. After arthroscopic preparation of the anterior glenoid rim, the Bankart lesion was repaired using a specially devised staple, which was introduced through the anterior arthroscopic portal. By 1987, 195 repairs had been per­formed at Ingham Medical.

Although Perthes first used staples to repair the detached anterior capsule in 1906, the technique was popularized by Du Toit and Roux from Johannesburg.[8] They reported on an open staple repair which they had been per­forming since 1932. They credited the proce­dure to Fouche and Allen whose surgical staples were fashioned from bicycle spokes. The anatomical basis is to reattach the avulsed AIGHL labrum complex to the glenoid neck with the staple. The method was modified by Boyd and Hunt [9] who introduced a barbed staple. The simple nature of this open operation led to great popularity, but loosening of the staples and degenerative lesions of the glenoid rim have led to its discontinuation as an operation.

The simplicity of this open procedure led to its reintroduction by Johnson as an arthrosco­pic technique in 1982.4 A special 4 mm staple was devised for arthroscopic delivery. The method according to Johnson is described below.

Both shoulders should be examined using the tests for instability (see Chapter 3). Johnson has found that external rotation is limited in the dislocating shoulder preoperatively by 12 degrees (with the elbow at the side) compared to the unaffected shoulder.

The patient is positioned in the lateral posi­tion for shoulder arthroscopy, and a single shoulder holder is used to suspend the arm. If the arm rolls into external rotation and starts to sublux in the suspension apparatus, then the procedure may become more than usually difficult. No more than 15lb of traction should be used, as further traction can cause damage to the brachial plexus.

The shoulder must always be arthroscoped prior to any surgical procedure for instability. Firstly, the joint can be examined far more thoroughly than at arthrotomy, allowing precise identification of the pathology, which in turn allows the surgeon to plan the selective repair required. For instance, a simple Bankart lesion needs a Bankart repair, either arthroscopic or open. A stretched AIGHL requires an open inferior capsular shift, and a patient with no labrum or glenohumeral ligaments needs an extra-articular augmentation, such as a Putti-Platt or Magnusson-Stack procedure.

Secondly, a large proportion of patients will have second pathology (Table 9.1) which can be assessed or corrected. Finally, the surgeon is given a legitimate reason for shoulder arthroscopy. The dislocating shoulder is ideal for training in shoulder arthroscopy as the joint is usually of large capacity, entry is easy, and there is a large amount of abnormal pathology on view.

The key to any surgical procedure is good exposure and this is as true of arthroscopy as of any open technique. Correct scope position­ing, atraumatic single insertion, and joint dis­tension are important for getting a good view. Control of bleeding is achieved by increasing intra-articular pressure to above systolic blood pressure. This can be done either by elevating the head of fluid, or by the use of a pump, increasing flow to wash out the joint, or the use of f ml 1/100000 adrenaline solution in 3000 ml saline for irrigation. If the exposure is not adequate, traction must not be increased. The procedure should be terminated and open repair undertaken.

Preparation of the bed for reattachment of the AIGHL labrum complex is vital to the success of the procedure. The Bankart lesion should be extended interiorly so as to allow the AIGHL to be shifted upwards and medially later in the procedure. The extension of the lesion must be performed with the greatest of care, firstly in order that the AIGHL complex is not damaged further; secondly because the axillary nerve lies just inferior to the axillary fold of the IGHL. Extension of the Bankart lesion also allows better access to the front of the glenoid neck which can be prepared by using a curette, the motorized shaving system or drill holes (Figure 9.9). The idea is to create a bleeding bed, for the bed must be vascularized for healing to occur. The staple is then inserted through the anterior portal, and the superior band of the AIGHL is impaled between the tines of the staple (Figure 9.10). It is now vital that the staple, with the impaled AIGHL, is shifted both superiorly up the anterior glenoid rim, and then medially in front of the glenoid rim to tighten up the  inferior glenohumeral  ligament complex and place it on the previously prepared vascu­larized bed (Figure 9.11). The staple is then hammered home. Loose staples are usually a result of the staple not being firmly inserted at operation, and it is sometimes difficult to judge if placement is secure, as the staple lies in front of the glenoid and can only be seen correctly with the arthroscope in the anterior portal. 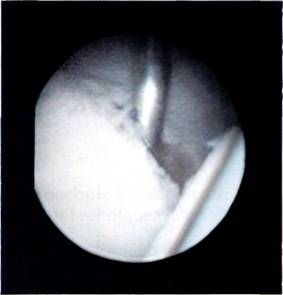 Figure 9.9 The glenoid neck is prepared using a bur.

Figure 9.10 The superior band of the inferior glenohumeral ligament is impaled between the tines of the staple.

Figure 9.11 The staple is shifted upwards and medially to tighten the inferior glenohumeral ligament complex.

The staple is removable if there is a failure to secure it to the bone, misplacement, unex­plained pain, repeat surgery or if in the throwing athlete. A biodegradable staple is currently being tested by Johnson.

The patient is immobilized in a sling in internal rotation for a full 3-week period. During weeks 4-6, pendulum exercises are encouraged. At week 7, overhead exercises are encouraged. When the patient has regained his preoperative range of motion, shoulder-strengthening exer­cises are started. When deltoid and cuff power have returned to preoperative levels then sports are allowed, but no throwing is allowed for 6 months.

Throughout the series there was a shift from using multiple staples to using a single staple. Preparation also developed from burring to drilling the anterior glenoid neck. The following technical problems were encountered. In 9 per cent, the ligaments were inadequate, a subsca­pulars tenodesis was attempted but 5 out of 15 redislocated, so this procedure has been aban­doned. If patients have no glenohumeral liga­ments, they require open augmentation. Inade­quate glenoid decortication was solved by changing the scope portal to the front or using a 90 degree arthroscope. Staple problems were encountered in the form of bending, breaking, missing the bone or loosening.

In the first 5 years, 6 months, there was no case of infection and no neurovascular injury, 15 staples had to be removed: 8 because of pain, 3 in athletes, 2 for loosening and 2 for poor position. The redislocation rate was 21 per cent. If the table of results is examined closely (Table 9.2), it can be seen that there was an unusually high dislocation rate in 1984. An analysis of the redislocations showed that those of 1984 were partly due to a change of postoperative policy to immobilization for only 2 weeks. This has been reinstated to 3 weeks. Two patients were AMBRI. Twenty-two patients redislocated while undertaking activities such as prizefighting, barfighting, basketball, foot­ball, baseball, waterskiing and diving.

External rotation was not limited subsequent to the procedure. Johnson, as mentioned, has made the interesting observation that external rotation is limited preoperatively, and this brings into question historical reports of normal rotation with various open procedures.

In summary the advantages of staple repair are: accurate diagnosis, microdebridement, lesion assessment and selective repair, which can be performed as a day-case procedure. The disadvantages are that it is a difficult technique, with a learning curve, and it can only be performed if the ligaments are present. The redislocation rate is 21 per cent but if short immobilization and collision sports are exclu­ded, the redislocation rate is only 6 per cent. No extra-articular reinforcement is possible and there are staple problems. A biodegradable staple is being tested.