This region corresponds to the origin of the long head of biceps. The biceps tendon originates from both the supraglenoid tubercle and superior labrum, [37,56] with many variations having been described. [6,37,56-63] In our study the biceps tendon originated from the supraglenoid tubercle and superior labrum in all 132 cases. No variation was noted.

Variation in the intra-articular appearance of the biceps tendon commonly occurs and should not be misinterpreted for pathological findings. [6-7,63-66] The biceps tendon changes shapes during its intra-articular route, from round in cross-section at its origin to flatten out as it crosses the humeral head and round again as it exits the joint. [7] It appears “…about one-quarter to three eights of an inch wide…” and through an arthroscope, might not be seen in all cases as it may be appear hidden by fat and synovia which are present in the upper region of the joint.[4]

The biceps pulley is a “…tendoligamentous sling…” formed by components of the rotator cuff interval. [67] At the bicipital groove, the biceps tendon exits the joint and is held in a “…U-shaped anterior suspension sling…” formed primarily by the superior gleno-humeral ligament. [68]

Variation in the biceps pulley occurs in pathological states and with shoulder movement. [68-69] In an arthroscopic study, Choi et al [68] noticed the intra-articular length of the long head of biceps changed with different arm positions, increasing in positions in which the arm is placed at the side and in neutral rotation and decreasing in length in positions of extreme abduction and external rotation as a result of the biceps pulley moving proximally. 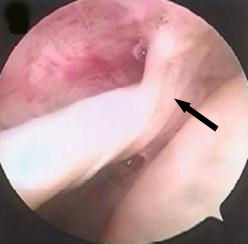