A shoulder holder is a suspension device for the arm, used to distract the glenohumeral joint. They vary from the homemade bent piece of tubing (Figure 4.7) to extremely sophisticated devices such as the electrically switched and vacuum-powered arthrobot (Figure 4.8).

Klein, France and Mutschler[3] performed a series of experiments to measure the strain on the brachial plexus exerted by a shoulder holder. They mounted strain gauges to the upper trunk, lateral cord, median nerve and radial nerve of five fresh cadavers, which were then put in the lateral decubitus position for shoulder arthroscopy and the strain on the plexus measured in relation to arm position and load. They concluded that the best position of the arm in terms of maximum visibility associ­ated with minimum strain on the plexus was either 45 degrees of forward flexion and 90 degrees of abduction, or 45 degrees of forward flexion and 0 degrees of abduction.

Figure 4.7 A very crude shoulder holder can be made from a bent pipe or a drip stand.

Figure 4.8 The arthrobot is a highly sophisticated shoulder holder.

Andrews et al[2] suggest that the best position for the arm is at 60-70 degrees of abduction and 15 degrees of forward flexion with 4 5-9 kg weight  applied   to  the   traction   apparatus. Caspari4 also feels that a traction apparatus is essential  because traction  supplied  by an assistant is inconsistent and wanes as the assistant tires. Matthews[5] suggests that the arm should be placed in 45-60 degrees of abduction and 15 degrees of flexion, but that no more than 4.5 kg weight should be used. Matthews[6] has  also  shown  how  abduction should be released before proceeding to sub­acromial endoscopy as, with the arm at the side, the volume of the subacromial space is doubled from the volume with the arm at 45 degrees of abduction. For arthroscopic repair of the shoulder, Matthews uses not one but two shoulder   holders  (Figure  4.9),   the  second distracting the glenohumeral joint and being attached to the arm at the mid-humeral level. It is essential, if using a two-holder technique, to pad the humerus copiously in order to prevent neuropraxia to the median and ulnar nerves. 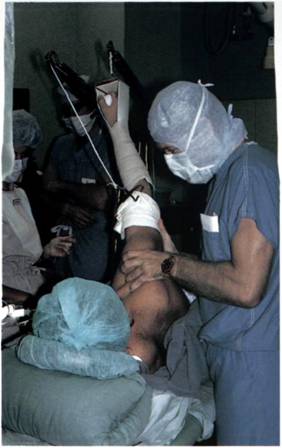 Figure 4.9 Two shoulder holders can be used to reduce pressure on the brachial plexus and distract the glenohumeral joint more thoroughly.

Gross and Fitzgibbons[7] also recommend applying the traction perpendicular to the humerus rather than along the line of the arm. They suggest that this elevates the humerus from the glenoid rather than distracting it into a subluxed position. This accentuates labral pathology and allows for better visualization of the lower third of the glenoid rim, while causing very little strain on the brachial plexus. They suggest that this should eliminate traction neuropraxias.