Tendinitis of the short rotators

THIS is a class of cases which I find it difficult to define, difficult to treat and difficult to explain from the point of view of pathology. Yet these cases form a fairly distinct clinical entity, which I formerly described under the adherent type (Type II) of subacromial bursitis. The experience of the last fifteen years has led me to doubt the advisability of calling this entity "bursitis," for I now believe it is essentially a tendinitis, with only secondary involvement of the bursa. The typical case is one of "frozen shoulder," which shows no calcified deposit, and in which a history of trauma is absent, vague or not clearly associated with the onset of symptoms. These cases are usually diagnosed as "periarthritis" or "neuritis." 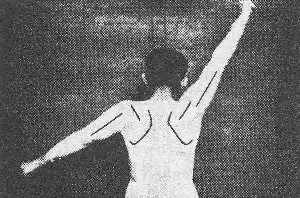 FIGURE 48.    FROZEN SHOULDER
The term "Frozen Shoulder" covers the cases which are the subject of this chapter, but it also applies to many other conditions which cause spasm of the short rotators or adhesions about the joint or bursa. This figure shows the characteristic limitations of a severe case. The outline of the posterior edge of the scapula and the axis of the spine of the scapula and acromion are indicated. In the "frozen shoulder" the axis of the shaft of the humerus is nearly at right angles to the axis of the spine of the scapula, and remains so in whatever direction the arm is moved. Although determining the relation of the axis of the shaft of the humerus to that of the spine of the scapula is a primary one for the understanding of the diagnosis or treatment of many shoulder lesions, it seems best to dwell on its importance here. Cases without distinct traumatic history which show a frozen shoulder, and in which the X-ray gives no information, are likely to be cases of the condition described in this chapter. Unless the other joints of the body show pronounced evidence of arthritis, you may be quite sure that you are dealing with a case of tendinitis.

"The study of the cases reported in the literature and of our series of 200 cases has shown us most strikingly that an exact evaluation of the importance of any one of the factors which may be involved in the causation of the disease, or of the relative value of the various therapeutic measures, is practically impossible. For, in our series, it has been found that in all cases, whether the evidence pointed to infection, metabolic disturbances or trauma as the important etiologic factor; whether the treatment stressed was eradication of foci, physical measures, manipulation or operation, that the time required for recovery and the total duration of the disease was remarkably constant throughout. This suggests that in these cases there must be some general physiologic disturbance as a common denominator, which cannot be explained or accounted for at present. We reiterate this statement because this fact seems to have been lost sight of by many workers in their enthusiasm for one particular type of treatment, or in their zealous endeavor to attribute the symptoms to some particular etiologic factor"

I would be inclined to swallow this paragraph whole if it were salted with just a little optimism.

Turn to those following Chapter VI, and note especially the remarks on Duplay's contributions.